The Lawrence Memorial Chapel reverberated to the splendid sounds of 300 angelic voices of the 6 Girl Choirs performing on Saturday, April 4th. And what variety was jam-packed into an hour and a half of singing, storytelling, dancing and playing instruments expounding on the concert’s theme “Folk Songs and Fairy Tales.”

A new feature was the live webcast on WLFM which made the concert virtually accessible to anyone in the world with an Internet computer connection. A record 69 households from around the world tuned in to hear the evening performance from such places as Sweden and the UK. Here is a sampling of emails received:

My wife & I listened live from our home in the village of Outwell, Norfolk, England & we would like to thank all concerned for an incredible performance, so very professional. Isn’t it amazing that Daphne & I could sit here in England listening to the live concert in Appleton. We listened in to the recorded Pre-Concert too & it was nice to hear a couple of English Folk Songs, I Had a Little Nut Tree & She Shall Have Music. We learned them at school a lonnnnnnnnnng time ago. Our friend’s daughter, Mackenzie Harrmann, was performing in Bel Canto which was the reason we had ‘tuned in.’ Thank you for making us a part of it & we’re now off to bed as it’s 02.40 in the morning.

I am so glad that you webcast this event! I am currently deploying to Iraq

overjoyed to be able to listen to my daughter sing. It was a treat to not

miss yet another event in my child’s life. Thank you so much.

Thank you so much for the broadcast of the Lawrence Girls Choir Concert tonight. We attend when we can – but right now we are in Florida and we could enjoy hearing our granddaughter sing thanks to you! Thank you! It was great. We followed along in the program notes so no commentary was needed. Thanks again.

Congratulations all on another banner year providing quality choral opportunities for girls in the Fox Valley region. Auditions for next year are happening soon. Check the Academy website for audition registration details: www.lawrence.edu/dept/acad_music. 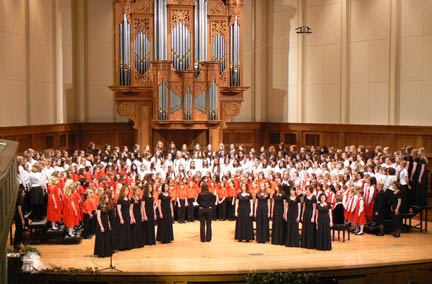