Whether you are a SATC fan or not, there are career lessons to be learned from that well-dressed foursome and their tumultuous relationships. (Warning: Spoiler alert.)

1. Get to the point. At over two hours, the Sex and the City movie goes on. And on and on. If you’re a big fan of the show, this may be a good thing. But your average movie-goer wonders, when is this thing going to end? Same thing applies at work. Make your communication simple, clear and to the point. No one has time or patience to read your long email.

This concept is especially important when interviewing. Be conscious of the tendency to ramble when nervous. Observe your interviewer. If you start to see wandering eyes or stifled yawns, you’re talking too much.

2. Pursuing your passion might not always be an option. By engaging in self-assessment and exploring careers, one is more likely to find a career about which they are truly passionate. There comes a time, however, when you have to stop thinking (or in some cases, obsessing) about finding your “perfect” career and just get to work. Take, for example, Carrie’s string of personal assistant interviewees. Among them, a Wall Street type. From the looks of the hot pink heels poking out beneath his suit it appears this guy’s passion is not finance, as his wardrobe might suggest. But maybe working in finance was a means to an end. Perhaps it meant a salary large enough to afford living in New York. Maybe it allowed him to make enough money to invest in lots of designer shoes. Maybe he worked in finance thinking that was his passion, and then realized fashion and designer shoes were really his true calling. The bottom line? Sometimes you can only do so much assessment while sitting on your couch. You have to get out there and try things out in order to see what fits. Once you experiment, you’ll have real-world experience from which you can continue to assess your interests, passions and goals.

3. Face your fears. In the film, Charlotte excitedly reveals to Carrie she is finally pregnant. Her dreams have come true, but now she’s so happy, she’s afraid she’ll jeoprodize it all. Charlotte gives up jogging because she fears she will hurt the baby. Yet, running is a part of who she is. After Carrie points this out, Charlotte eventually faces her fear and begins to run again, pregnant belly and all. The same applies to careers. Should you take that promotion that requires relocation? Can you afford to change careers? Should you leave a job in which you are truly unhappy, even if it means unemployment? These are not easy decisions to make. In order to be successful, one must understand that fear is a normal part of career development. Sometimes you need to take calculated risks or face your fears in order to be who you truly are, to be happy or to be healthy.

4. The greatest job in the world won’t be great if the rest of your life is a mess. At the start of the film, we see Samantha has made the move to Hollywood, where her PR business has taken off, along with Smith’s career. But Sam misses New York and she is tired of her life revolving around her boyfriend. It takes an accidental sighting of her naked neighbor for her to realize she isn’t getting what she needs from her work, relationship or Hollywood life. While moving across the country was probably a terrific move for her business, Samantha’s personal life suffers as a result. The take-away? Be sure to consider external factors, such as personal relationships, geography and community during a job search or relocation. Learn from the choices you’ve made, even if the results were less than ideal. 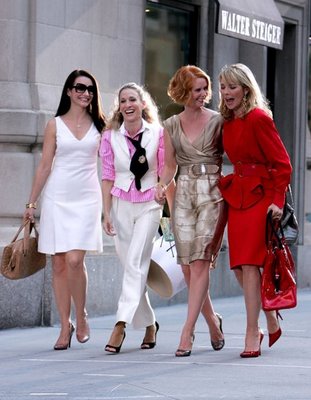 5. Dress (or accessorize) for the job you want. When complemented on her handbag, Louise, Carrie’s new assistant, reveals it is rented. Louise can’t afford to buy the handbag, but she finds another way to look the part for the job she wants. While a designer handbag isn’t necessarily the key to getting hired, dressing for the job you want, not the job you have, can help you score that gig or earn that promotion. Never underestimate the power of appearance.

6. Be a better public speaker. During Carrie and Big’s rehearsal dinner, Samantha delivers a speech. What makes it great? She uses personal stories to highlight her points. She doesn’t sound rehearsed, but she clearly thought ahead of time about the message she wants to deliver. She is confident. And, when some jerk makes ridiculously inappropriate comments, she puts him in his place. In doing so, she builds rapport with the other audience members who were secretly cringing while listening to Mr. Inappropriate. The ability to speak in public is an essential career skill and Samantha has it mastered.

7. Come clean when you mess up. When you make a mistake at work, there is no point in hiding it. When Steve cheats on Miranda, he can’t help but tell her the truth. Most managers and supervisors will respect you more if you admit to your mistakes. Let your boss know as soon as possible what went wrong so he or she can be better prepared for the potential fallout. Explain to your boss what happened, without making excuses, what you are doing to fix the problem and how you will prevent it from happening again. How would Miranda and Steve be able to move forward had Steve tried to hide his slip up? Chances are their trust would have been even more broken had Miranda accidentally discovered Steve’s affair or found out years later. Plus, how long would their misery have continued if Steve’s mistake had not forced them to examine the challenges in their relationship?

8. Pay attention to what people are saying. Or not saying. Carrie and Big’s wedding plans start out small and low-key but quickly become more and more extravagant. There are signs Big is not comfortable with the wedding hoopla, but Carrie misses them or downplays their seriousness. Meanwhile, Big fails to clearly identify and communicate his reservations. Neither wants to have the difficult conversation, even when the opportunity presents itself. Just as you need to listen to your partner, you need to listen at work. Studies show that people who listen more than they talk are better communicators. Watch, listen and learn from your supervisors’ and colleagues’ cues in order to work better as a team.

One thought on “Sex and the City career lessons”