Though this year’s winners of the Bank of Sweden’s prize in memory of Alfred Nobel may not have been on the radar screens of many, at least two of the three were predicted by a very prominent group of economists. As reported on the Cheap Talk blog,

Northwestern’s economists and those in several departments at the neighboring Kellogg School of Management put Dale Mortensen as their top prediction, with Peter Diamond in third place. Well, perhaps I should mention that Dale Mortensen is at Northwestern… Anyways, Jean Tirole was also highly favored, really by everyone except the Nobel committee. The only rational conclusion can be that the Nobel committee has good reasons to believe that Monsieur Tirole will have a long life. Though he did not get the Nobel (again) this year, he should be able to use this to get a lower life insurance rate. Anyways, take a look at Jeff Ely’s “live blogging” of the Nobel at Cheap Talk. By the way, In spite of 12 faculty members in the relevant disciplines believing that Mortensen was getting the big prize, apparently this news caught the Northwestern PR people by surprise, too. Almost three hours after the prize was announced, the top news on the Northwestern homepage is still the refurbishing of Evans House: 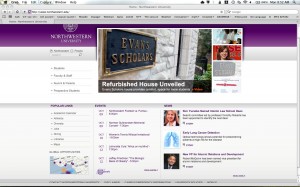