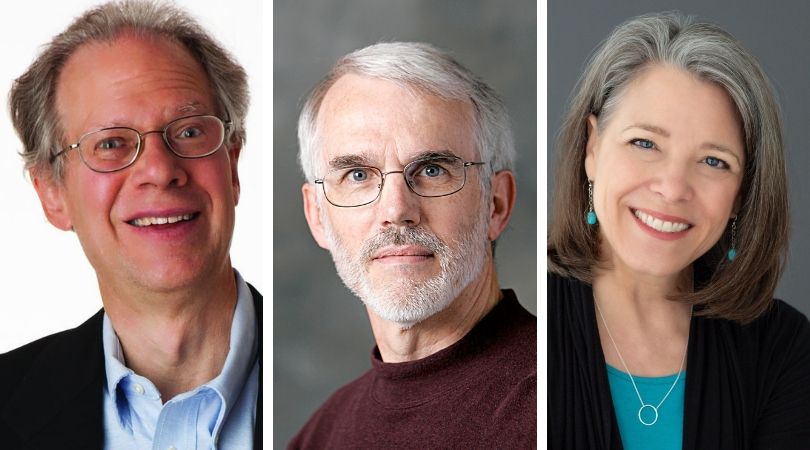 Two tenure-track faculty and one long-time adjunct faculty will bid farewell to Lawrence University at the close of spring term.

Bruce Hetzler, a fixture in the psychology department for more than four decades, and Kenneth and Joanne Bozeman, key players in the growth and success of the Conservatory of Music, are retiring. The three have a combined 110 years of teaching at Lawrence.

Lawrentians with long memories may recall that the Bozemans, then a young married couple, also served as head residents of Trever Hall for two years in the early 1980s.

Hetzler and Ken Bozeman came to Lawrence at the same time, joining the robust incoming faculty class of 1977. Joanne Bozeman joined as an adjunct faculty member in 1993.

They talked to us about Lawrence pride, new journeys and the emotions of saying goodbye.

Bruce Hetzler: “We were one of the few undergraduate institutions to have a neuroscience program.”

Bruce Hetzler has been a leading voice in the psychology department at Lawrence since 1977. You might even say his 42-year run has been magical.

Hetzler has often mixed his love of magic with his passion for teaching about the brain.

Much of his work at Lawrence focused on neuropharmacology, effects of alcohol on the brain, computer analysis of brain waves and neuroscience.

He and his students through the years published dozens of papers on a wide range of brain-focused topics, the latest being a study on why some people co-abuse methylphenidate (most common trade name is Ritalin) and alcohol. That paper, with co-authors Lauren W.Y. McLester-Davis ’18 and Sadie E. Tenpas ’17, was published in the June edition of the journal Alcohol.

“I have mixed emotions,” Hetlzer said of his retirement. “I’ve been here a long time, and I’ve loved it. I’ve enjoyed teaching, I’ve enjoyed doing research, and I’ve enjoyed working with students in the laboratory. But it has been 42 years, so I think it’s time for this chapter in my life to close.”

Hetzler spent much of his career doing research on the effects of drugs on the brain, most specifically alcohol. He is a charter member of the International Society for Biomedical Research on Alcoholism.

He was part of a faculty group that launched the initial neuroscience program at Lawrence in the early 1980s.

It eventually became a major at Lawrence, and the number of faculty positions tied to the program has grown considerably.

“That wasn’t just me, it was a lot of people who put that together,” Hetzler said. “But it’s been very pleasing to see it grow like that.”

Outside of his teaching duties at Lawrence, Hetzler for years could be found doing table-side magic at local restaurants such as B.J. Clancy’s and Ground Round.

He persevered with both his teaching and his magic after suffering a major stroke in the summer of 2011. Relearning magic tricks, he said, helped with his long and slow recovery.

Now he hopes to dedicate more time in retirement to the physical therapy that’s needed to regain many of his magician skills.

“I’d love to be able to do table-side magic at a restaurant again in the future, but that depends on my determination to do exercises to increase my dexterity and my ability to walk without a cane,” Hetzler said. “The year before I had a stroke I was doing 100 magic shows a year. Now I do maybe five. I’m not sure my wife would like me to do 100 again, but somewhere in between would be nice.”

Kenneth Bozeman: “When you are working on someone’s voice, in a sense you are messing with their soul.”

Music professor Kenneth Bozeman, retiring after 42 years on the Conservatory of Music faculty, has left an impressive imprint that’s difficult to measure.

He led the voice department for much of his tenure, in the process providing important leadership not just in the Conservatory but across campus. In addition to his work as a respected voice teacher, he has led or been a part of talent searches for Conservatory faculty and new deans and has played a big role in campus projects such as the expansion of the Music-Drama Center and the building of the Warch Campus Center.

In recent years, his focus has been in the growing field of acoustic voice pedagogy. He’s become an in-demand scholar on that topic across the country.

But it’s in the voice studio, working one-on-one with students, where Bozeman says his heart remains.

“Voice teaching is totally one-on-one, so it’s pretty personal,” he said. “When you are working on someone’s voice, in a sense you are messing with their soul. Their sense of personal identity is wrapped up in their voice.”

He’s done it well. In 2018, Bozeman was chosen by his peers for the Lawrence Faculty Convocation Award, which honors a faculty member for distinguished professional work. He was the ninth faculty member so honored.

Bozeman is the author of two books, Practical Vocal Acoustics: Pedagogic Applications for Teachers and Singers and Kinesthetic Voice Pedagogy: Motivating Acoustic Efficiency. He was awarded the Van Lawrence Fellowship by the Voice Foundation in 1994 for his work in voice science and pedagogy.

He has been recognized with two Lawrence teaching honors, the Young Teacher Award in 1980 and the Excellence in Teaching Award in 1996.

Under his guidance, the voice department within the Conservatory has grown from about 40 students and four instructors to nearly 100 students being taught by five full-time studio faculty, one adjunct faculty, two choral directors, opera and theater directors, a vocal coach and other contributors.

“We’ve seen a lot of growth,” Bozeman said. “There’s been good quality all along. There was always some good talent in the student pool. … But now it certainly feels like there is a lot more talent here. It’s definitely harder to get in here. The talent floor has risen because of the competitiveness of it.

“And what we’re able to provide in terms of training is much deeper and richer as well.”

As the years have gone by, an increasing number of voice students have gone on to sing professionally or pursue voice in graduate school programs.

He said he’ll continue to do voice work in retirement. He’s already committed to a weeklong workshop on acoustic voice pedagogy this summer at the New England Conservatory of Music in Boston. He’ll also be presenting at multiple conferences and will be doing private voice teaching, focused on young professional singers.

Joanne Bozeman has been an adjunct member of the voice department at Lawrence since 1993, teaching studio voice and related course work.

She also was a sought-after soloist in recital, concert and oratorio for nearly four decades. She’s appeared with, among others, the Fox Valley Symphony, the Green Lake Music Festival, the Bach Chamber Choir in Rockford, Illinois, and the Lawrence University Concert Choir and Orchestra.

While she’ll stay active in private teaching and related projects in retirement, it’s the voice studio instruction — working one-on-one with students as their voices and their music knowledge transform over four years — that will be difficult to leave behind.

“I’ll miss working with students in the long term, four or five years, developing their skill set and seeing them master certain things,” she said. “The change between an 18-year-old singer and a 21- or 22-year-old singer is a huge transition. It’s really exciting to be involved with that.”

Many instrumentalists arrive at the Conservatory having been in training for a dozen or more years. Not so much for voice students.

“Singers don’t know they have an instrument until they’re maybe 14, 15 or 16 years old,” Bozeman said. “They maybe haven’t had theory or lessons and they come in a little more raw. To see their incredible strides and development over that period of time is really cool.”

Bozeman called working with the voice faculty in the Conservatory a joy.

“We don’t always agree with each other, but we really do get along,” she said. “I admire my colleagues’ skills in the studio, and we are friends. I’ll miss that kind of intimate relationship. I’ll miss the people in the office, and I’ll miss my wonderful colleagues all over the Conservatory.”

In addition to giving private voice lessons, Bozeman is working on a book about women’s singing voices as they go through perimenopause and menopause. The book, which she is co-writing with two other women, has included interviews to date with nearly 60 women, ranging from elite professional singers to those who participate in community choirs.

It’s an emotional and very personal issue for women who want to continue singing as they age, Bozeman said.

“Some breeze through it,” she said. “Some struggle. I really struggled. That’s kind of what fueled my interest in the issue.”