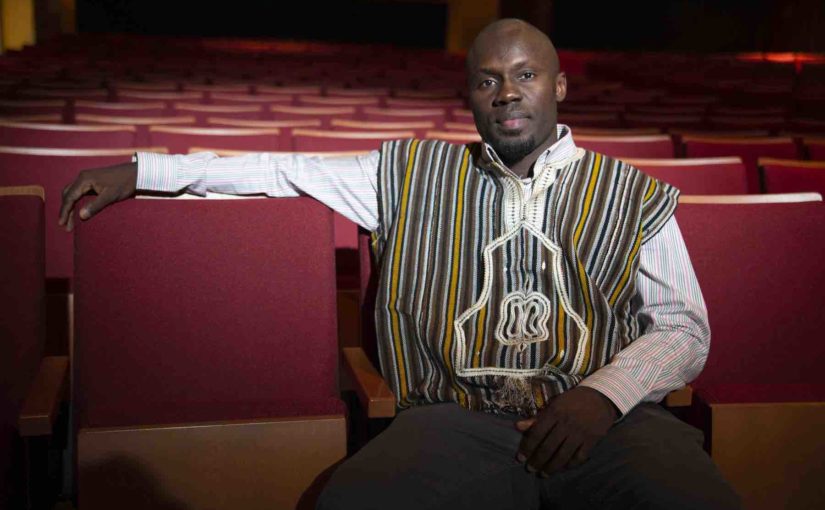 Sierra Leone was marred by an 11-year civil war from 1991 to 2002. In its wake, the war wiped out the country’s once-thriving theater culture. Seventeen years later, Lawrence University student Patrick Adu ’19 is leading the way to revive his country’s performing arts scene.

Prior to the civil war in Sierra Leone, theater was an essential medium for expressing views on a range of issues. No matter what the topic was, Patrick says theater was an integral part of people’s lives.

“(The impact) was very strong,” he says. “People loved it. People went to see it and get some information to take back home to create and start working on change.”

But the damage in the aftermath of the war was so immense that people forgot about plays. It was necessary to prioritize rebuilding roads, schools and hospitals. The performing arts were mostly pushed aside.

Now Patrick is bringing the former glory of Sierra Leone’s theater culture to the government’s attention with his plans for Target Theatre. He has communicated with some government officials who are ready to work with him. Other people back home are ready for the change, too, Patrick says. He receives encouraging social media engagement in response to his efforts.

“There are people who are very, very interested in reviving the arts there. They said, ‘We will work together and we’re happy you want to revive this stuff.’ So, I think I will have a good relationship and support from people back home.”

Patrick explains the two primary steps that will guide his efforts: “Those performances, scripts, plays, should go back on stage. We want to revive the art of watching plays, actors acting in the entire country. And the second, to revive arts education. By that we can help youths. This is an ambitious project that has all these components, but we want to roll them out one step at a time.”

Equipped with his studies at Lawrence in theater arts and a passion for keeping theater alive around the world, Patrick plans on one day teaching theater arts at a university. But for now, Target Theatre has his full attention.

“It’s very important for arts education to come back to life,” he says.

If you’d like to support Patrick’s cause or find out more information, visit this link: www.gofundme.com/help-revive-theatre-in-sierra-leone