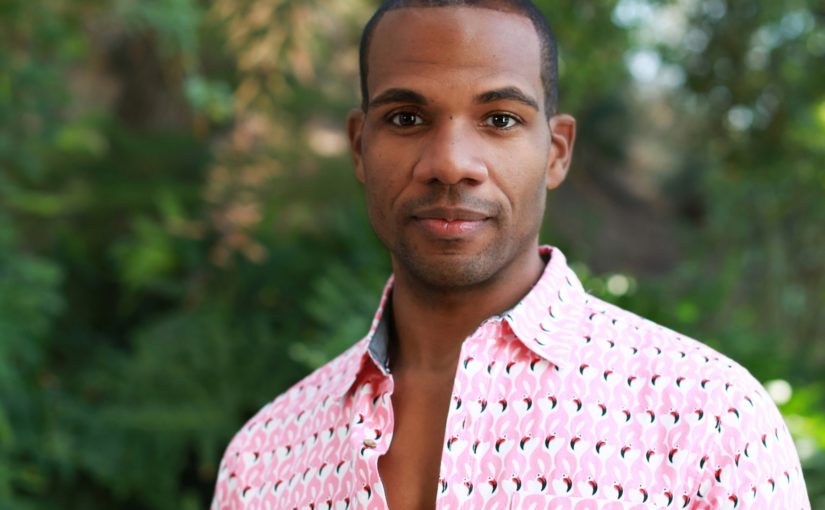 Derrell Acon ’10 stood shoulder to shoulder earlier this month with Antron McCray, one of the five New York City teenagers — now men in their 40s — wrongly convicted in the 1989 rape and beating of a Central Park jogger.

The Lawrence University alumnus was days away from performing as McCray in The Central Park Five, an operatic retelling of the emotionally charged criminal case, set to open in an opera house in southern California. An ACLU luncheon brought Acon and his castmates and the five men they’d be portraying into the same room for the first time.

“It gave me a little more weight in terms of the responsibility I had to give an accurate picture to the audience and to be true to how I explored and continue to explore that character,” Acon said of meeting McCray.

The Central Park Five story of the coerced confessions, the guilty verdicts, the Donald Trump call for the death penalty, the vacated judgments 13 years later, and the eventual settlement that set New York City back $41 million is getting plenty of renewed attention on the heels of the recent release of Ava DuVernay’s Netflix mini-series, When They See Us, the intense retelling of the case that dominated headlines 30 years ago.

While the Netflix series is getting the bulk of the attention, the jazz-infused opera production from composer Anthony Davis — more than three years in the making and separate from the DuVernay series — has drawn its fair share of looks as well. The New York Times and Los Angeles Times previewed the Long Beach Opera production in the days before it opened on June 15, and opening night saw reviews from both newspapers and the Wall Street Journal, among other outlets. The New Yorker is working on a story as well, according to a spokesperson with the opera.

Two more performances are scheduled for this weekend at the Warner Grand Theater in San Pedro, California.

“I wasn’t really anticipating any particular response,” Acon said after getting an enthusiastic welcome on opening night. “I was more aware of my own responses, understanding that it would be a very emotional process for me. As a young black man in America, you know, a lot of these topics are very close to my own experience, and these struggles are very mirrored in my own life.

“I think a lot about the rehearsal process, tending to all of these emotions, letting them out, having a lot of beautiful discussions with my colleagues, especially the five of us in the lead roles.”

The timing is coincidental, Acon said, but that the opera arrives amid heightened attention on the Central Park Five case is certainly beneficial to the public conversation. An earlier effort by Davis to debut the opera — since retooled and renamed — in New Jersey drew little attention. But that was before the Netflix series arrived.

“I’m a firm believer that everything is happening when it needs to happen,” Acon said. “All of these things are happening at once. It’s almost because our society is so resistant to the truth being revealed that you almost need it to be thrown into the mix as an atomic bomb for people to really put their ears up and understand how important this is, how terribly, terribly unjust this was.”

A journey to Long Beach

He spent the next two and a half years on the road, performing, lecturing and studying. The schedule began to wear on his voice. Ten months ago, he relocated to southern California, drawn by what he calls the area’s “laid-back culture” and the plethora of arts opportunities.

He connected immediately with the Long Beach Opera, which was in the midst of a season based on issues of injustice. The casting for The Central Park Five was just getting started.

“I sang for them and was invited to join the cast,” Acon said.

He was working with people he didn’t know while immersing himself in the West Coast arts scene. He jumped into the mix as the opera company’s manager of education and engagement, organizing and facilitating community conversations in the months leading up to the opening of The Central Park Five.

“The journey began there,” Acon said. “It was kind of a crash course in introducing me to the classical music scene here. I am someone who has spent a lot of time in the Midwest and on the East Coast, so the West Coast scene was new for me, and this was just a beautiful introduction to that scene.”

The well-attended community conversations gave people a chance to speak their mind, to share with others in a very public and very cleansing way. To do it with the arts as an avenue to positive discourse on an emotionally charged topic was beautiful to see, Acon said.

“The key word is community,” he said. “The arts have this ability to create a community. Especially something like opera, where what you’re hearing is so visceral, it’s so emotional, so loud, as some of the younger people who have seen my work would say. You don’t really have an opportunity to do anything but listen. It’s so in your face, it’s in your soul, it’s in your heart.

“You may not always agree with the topic being put forth, but you are put in a position of contemplation, of consideration, and that is a communal experience. … Having the community of the opera house and the guidance of the voices and actors on stage may be enough to spark the conversation and the courage needed to really dig into some of these topics.”

As the June 15 opener drew closer, the performance of The Central Park Five was being described as both emotional and powerful, with Acon and the other lead actors often singing in unison, a singular and pained collective character.

“I think operas work on multiple levels, and certainly a visceral level is one that I’m very concerned with,” said Davis, who created the production in partnership with Richard Wesley. “I want the audience to have an emotional experience that involves identifying with the characters and putting yourself in their place.”

After the opera opened, reviewer Mark Swed of the Los Angeles Times wrote: “Most of the opera, which is in two acts, follows the five through their arbitrary apprehension, inappropriate questioning, dubious trial, conviction and harsh sentencing. The boys react much of the time in quintet, voices blending in disbelief and outrage. The most effective operatic innovation is the creation of the Masque, who is less a character than the embodiment of white racism, be it the police, a reporter or various others.”

The reviews from opening night have been mixed, with reviewer Zachary Woolfe of the New York Times suggesting that the tone and the angst was spot on but having the five leads often sing as a Greek chorus means they “never have the chance to come to life as individuals, either in music or words.”

That’s a complaint, Acon said, that he also heard from a high school student who was part of a group he brought to a dress rehearsal. It’s a legitimate perspective, he said, but one he doesn’t necessarily share.

“I personally believe the opera is very effective in the way it keeps the five in unison, for the most part,” he said. “In a way, it’s saying this experience is not individual. This experience happens to so many young black men and other men of color in this country, so much to the point that we can sing the same words at the same time, in a metaphorical sense, because we all have these same sentiments as it relates to the American criminal justice system.”

When The Central Park Five performances conclude this weekend, Acon, a bass-baritone, said he’ll turn his attention to new opportunities in southern California.

The arts as a vehicle for education and understanding will almost certainly be part of that journey.

Acon, who serves on the Lawrence Board of Trustees as a Recent Graduate Trustee — a position established for alumni within two to 10 years of their graduation — earned multiple regional and national honors as a student and already has more than two dozen operatic roles on his resume.

His deep thinking on issues related to the arts, race and public policy was plenty evident during his time at Lawrence, and Brian Pertl, Lawrence’s dean of the Conservatory of Music, isn’t surprised that Acon is seeing early career success.

“At Lawrence, Derrell was already an outstanding scholar and stellar performer,” Pertl said. “The performance he created in association with his honors project, Whence Comes Black Art?: The Construction and Application of ‘Black Motivation,’  stands as one of the most important and compelling student productions I have seen in the past 10 years.”

Ten months after landing in southern California, Acon said he feels like he’s found his artistic groove. The work with Long Beach Opera is just the start of some promising things.

“I’m excited to see what comes next,” he said. “I’ve got a lot of opportunities, and they keep coming in. It’s very encouraging.”