Founded in 1847 as an institution open to men and women of immigrant and indigenous backgrounds, Lawrence has, from the beginning, been a forward-thinking place focused on creating a welcome and supportive community for all of its students to thrive and succeed.

We have learned, however, that—despite that auspicious start—Lawrence still has more work to do so all members of the Lawrence family feel equally at home in our intellectual community.

Like we have seen at many colleges around the country this academic year, the Lawrence community has been engaged in broad-ranging, deep and often intense conversations about race on campus.

At the end of November, right before the end of fall term, a group of students met with President Mark Burstein and our dean of students, to express their own experiences, anger, and frustrations, as well as a letter of demands and concerns for the institution, many of which are thematically similar to what we are seeing on other campuses across the country, but more pertinent to the Lawrence community and its needs.

Broadly, our students—in line with our faculty and staff—are seeking a more inclusive and racially sensitive campus climate, and a commitment from the administration to acknowledge our shortcomings on that front while addressing proactively changes to our campus culture. Many of the demands parallel projects and initiatives that different parts of the institution have been working on for some time.

However, as the president stated in a letter to the community right before students returned from break: “A defining goal for Lawrence and certainly for me is to create a learning environment in which all students, as well as faculty and staff, can thrive. This fall’s events indicate that we have not moved quickly enough towards this goal.”

Right before we returned from the winter break, President Burstein shared with the Lawrence community a “Framework for a More Inclusive Lawrence,” which resulted from the work of shared governance among students, faculty and staff in the five weeks since the fall term had ended. The framework focuses on five principal areas that will be the focus for our efforts in the coming months:

For three hours on Thursday evening, January 7, we held a community gathering in the Warch Campus Center with ten information stations staffed by members of the Lawrence community responsible for managing these initiatives, much like a college fair. Attendance was extraordinary as students, faculty, and staff moved from station to station asking questions, posing challenges, sparking ideas, critically problem-solving.

Media were not permitted to attend the event, as this is a matter we wanted to discuss first “among the family of Lawrentians” without the distraction of lights and cameras. We did, however, invite them in after the event was completed, so they could conduct interviews and continue their reporting on the issue. Below are links to three of the stories—one newspaper, two television—that ran January 8.

We know we have much work to do. But with so many members of the Lawrence community committed to accelerating this important work, we know we will evolve through this process into an even better Lawrence.

We are putting the finishing touches on a new Diversity & Inclusion website that will launch next week, which will include resources for the Lawrence community and those who wish to learn more about our history and our future as it pertains to this important issue.

On January 6 at 5:01pm, in the midst of the worst polar vortex in recent US history, a terrible thing happened: My nose-hairs froze.

If you’re reading this and originally hail from the North, this probably isn’t a foreign concept to you (albeit a little graphic, and for that, I apologize). But if you’re from where I am – a magical land of year-round beach going and endless supplies of fresh oranges – you probably think I’m nuts. And let me tell you, cotillion certainly did not provide me with a more lady-like way to express what happened to me above. (Sorry, Mom.)

When I told my parents I would be moving away from the South for the first time in my life in favor of a job in Northeast Wisconsin, they took the news with all the excitement of a root canal. (And like a bad root canal, this one seemed to come to them without enough Novocain.) Though I know they tried to be as supportive as possible, there was obvious doubt I could survive what from that day forward will forever be known to my family as The Great Frozen Tundra. 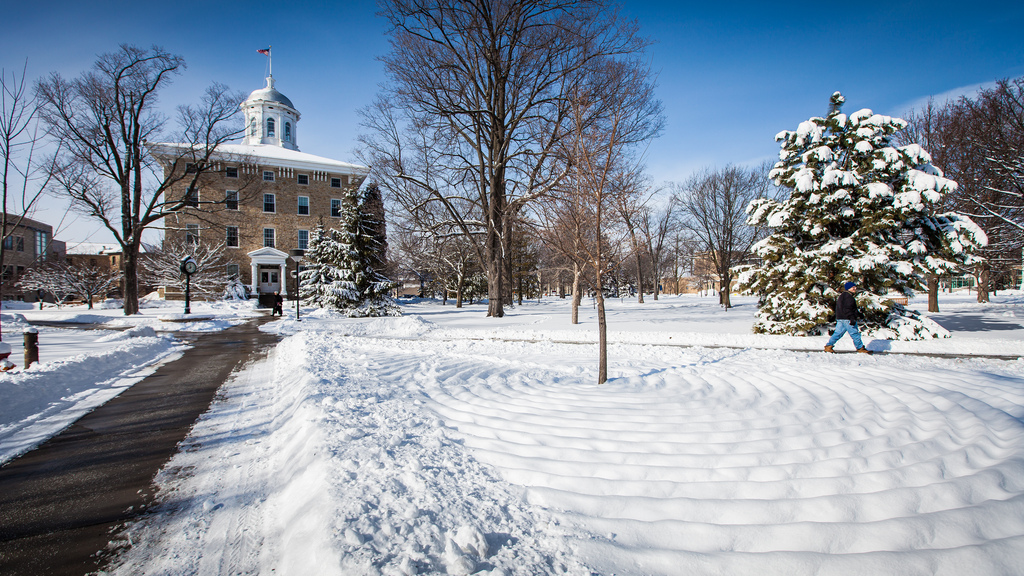 Perhaps naively, I didn’t think it would be that hard. After all, I’m a millennial… I can do anything! (Insert generational commentary here,) I’d buy a coat, start my new career, and get on with it.

I made the brilliant (read: lucky) decision to move in August – you know, sweater weather time. I loved Lawrence instantly and proudly volunteered for Welcome Week, where I courteously provided directions (likely wrong) to other newcomers like myself.

But as time tolled on, I realized there were quite a few differences I may not have been prepared for. So, with all the wisdom that comes with exactly 5 months and 5 days of living in Wisconsin, here is a brief list of things you may be comforted to know in advance:

So maybe I do still wear a puffy coat when it’s a balmy 27 degrees and sometimes mistake the names of fancy apple breeds for 90s pop stars… I still maintain that when all is said and done, Lawrence makes it all worth it. And if I – and my 6 pound puppy – can do it, so can you.

Gaelyn Rose is a recent addition to the Lawrence Admissions staff. Arriving in Appleton by way of Houston, Texas, she shares her experiences dealing with the regional changes of all things weather, language, and critters.

A little more than a month ago, a previous blog post focused on Mother Nature’s nastier side in the form of Hurricane Sandy and its impact on, among many things, the college application process. Today we get a glimpse of Mother Nature’s friendlier side: a 3-inch snowfall followed by a cloudless blue sky here in Appleton. Enjoy this morning’s meander around campus.