Applying for financial aid can be a daunting, challenging, and intimidating process. That’s why the U.S. Department of Education has made it even more confusing… er… easier… well, kinda. If someone you love has a FAFSA that was selected for “verification,” they’ll have to do some more work to show that their information reported on the FAFSA is correct (verification is the U.S. Department of Education’s version of IHRTLUHC). Students and parents can request a tax return transcript (transcript, not a copy of IRS Form 1040) and support the USPS, or they can use the speedy and (hopefully) easy IRS Data Retrieval.

More information about the process and a nice YouTube video help explain the process online at www.lawrence.edu/dept/finaid/forms/verification/#Step1.

—The This Really isn’t This is Lawrence Team 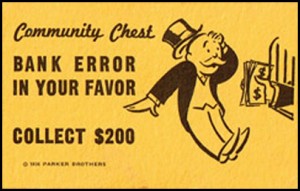 If you have been a close reader of our website, you may be familiar with our array of academic scholarships and their amounts. Furthermore, if you have received one of those scholarships from us, you may have noticed that the dollar amounts have changed… for the better.

Don’t worry. It’s not a test. The amount is correct. We just haven’t changed the website yet.

If you have not received a scholarship from Lawrence, you may be disappointed, but please do not despair. Lawrence devotes much more of its institutional gift aid toward need-based financial aid. To that end, we strongly encourage you to file for financial aid, so we can explore using more tools to make a Lawrence education more accessible.

And when it comes to filing for financial aid and applying for outside scholarships, we encourage everyone to adopt the Wayne Gretzky philosophy: “You miss 100 percent of the shots you never take.”

No long windups in this post. We’ll get right to the point.

To file for financial aid at Lawrence you’ll need to submit:

All are available at our Financial Aid office’s nifty forms page.

It’s a truism to say that the current financial upheavals in the world have prompted many of us to feel insecure about the future. Predictably, the media have begun to run stories about students who are changing their college choices because (according to the media), “they can no longer afford to attend the higher-priced private colleges they originally were interested in.” It’s easy to find these students and to report their stories–there’s dramatic tension in them, so they lend themselves well to storytelling. But, as is so often the case with media stories about higher education, they are also dangerously simplistic.

The most unfortunate part of these stories is that they encourage other students (and their families) to alter their college choices inappropriately. These stories focus on the cost of college–or, more accurately, on the perceived cost of college–as the primary factor on which to base a college choice. In doing so, they distract attention from what should be the primary factor–that of how good a match a particular college is for a particular student. Students who follow the path the media has set out for them are encouraged to “settle” for colleges that are not perhaps the best match for them.

The scenario typically offered by the media makes the assumption that a student’s family would pay the entire cost of college and, confronted by a decline in its financial resources, the family (and the student) is relegated to choosing a lower-priced college. At most high-priced private colleges, many (if not the majority of the) families cannot afford the full cost of education, so they receive financial aid to allow them to do so. If a family in this group has suffered a financial downturn, it will now be eligible for more financial aid than it might have been previously. Similarly, if a family that previously could have afforded the entire cost of education suffers such a downturn and no longer can afford the entire cost, it will now join the ranks of those who qualify for need-based aid.

Certainly, there is a small number of families who, like those featured in the media, have suffered a substantial downturn, but still will not qualify for need-based aid even at a private college. Those families are probably among the top 3 to 5 percent of the nation’s wealthiest families. So even though the cost of college is now higher in relation to their financial circumstances, the argument that they “must” choose a lower-priced college really is not accurate. They may “decide” to choose a less expensive college–but it is a choice, not a financial necessity.

College should be viewed as a long-term investment, as it will pay dividends over a lifetime. Students should not abandon their college dreams because of short-term financial challenges. If a student has a great experience at a college that is a great match for him or her, twenty years from now that experience will still be paying great dividends.

Stay tuned… there is more to come.

Dean of Admissions and Financial Aid