Yesterday, we left you with a cliffhanger. Today, the start of an answer.

It has always been the particular challenge of a liberal arts and sciences program to answer the question “What can you do with it?” The question has become increasingly pointed in an economy that continues continues to sputter, joblessness remains woefully high, and, college costs continue to rise. The problem has been exacerbated by legislators (Democrats and Republicans alike) that often equate “college education” with “professional preparation”.  The Obama administration’s drive to put the United States back on top of the list of nations with the highest percentages of college degree holders by 2020 illustrates this. (We’re not even in the top 10, according to the Organization for Economic and Cooperative Development.)

But there’s more to college education and professional preparation than just holding a degree.

It is necessary to have a well-trained, technically proficient citizenry. We need engineers, scientists, accountants, developers and others who can solve problems. But we also need people in these professions to be able to explain to others how they solved the problems. More important they need to teach others how to solve them for themselves. Purely vocational training likely will not get you all the way there. Strong writing, speaking and thinking skills can separate the merely good problem-solver from the great ones.

But limiting the discussion to the world of work is only part of the story. What of our lives outside our jobs?

What about being an informed citizen, one who can say not only what she believes, but make a compelling case for why she believes it?

What about being a critical consumer of information, one who is less likely to believe something just because it’s coming from an “authority,” like a newspaper, a news program, a blog, a politician, or even a professor.

The liberal arts and sciences can play an important role in developing the whole person—professionally and personally.

In a landmark study, Academically Adrift: Limited Learning on College Campuses (University of Chicago Press, 2011), Richard Arum and Josipa Roksa attempt to address a variety of questions about the amount and type of learning occurring in American colleges, based on a five-year longitudinal study of 2,300 students on 24 diverse campuses. One of the questions they address—are students improving their critical thinking, complex reasoning, and writing skills during college?—finds a positive correlation between academic rigor and the amount of gains seen in the development of this set of skills. Their Collegiate Learning Assessment (CLA) used performance tasks and holistic assessments (instead of surveys) to measure not only what students know, but what they don’t know.

In the study, students in the liberal arts and sciences fared far better than their peers in professional programs like business, engineering, communications, education and health. One of their hypotheses, according to Arum at a recent address to more than 100 college enrollment officials, is that the traditional arts and sciences is where the most academic rigor and, as a result, the most learning occurs, largely because of their heavier requirements for reading, writing, and intensive study—three activities that tend to be more independent endeavors. The study finds that students who spent, on average, more hours of independent study per week during college fared far better than those who spent, on average more hours in group study with peers during their college careers.

An interesting side note to the study is that those students who spent more time studying independently were also far more likely to read print or online news daily, and to discuss politics and public affairs.

So back to that question: “What can you do with the liberal arts and sciences?”

In an uncertain world, where the commonplace idea is that the most in-demand jobs ten years from now don’t yet exist, being a nimble, flexible, adaptive learner equipped with finely tuned reading, writing, speaking and thinking skills can be advantageous. A liberal arts and sciences curriculum can prepare you for your first job (though vocational experiences like internships will undoubtedly enhance that preparation). Perhaps more important, a liberal arts and sciences curriculum should prepare you for all of the jobs you’ll have after that.

And lest we pigeonhole ourselves merely as workers, a liberal arts and sciences curriculum can broaden the skills essential to a meaningful life outside the world of work. Such as being able to detect when a “man is talking rot.”

Or, as Andrew Delbanco, cultural critic and author of College: What it Was, Is, and Should Be, said in an address in 2012: “You’re going to spend the rest of your life inside your head. You may as well make it an interesting place to be.”

Nothing that you will learn in the course of your studies will be of the slightest possible use to you in after life, save only this, that if you work hard and intelligently you should be able to detect when a man is talking rot, and that, in my view, is the main, if not the sole, purpose of education.

Even though it was more than a century ago when John Alexander Smith, a University of Oxford professor of moral philosophy, opened his course with this counterintuitive utterance, the core of his message is as essential today as it was not only then, but for centuries before that.

Today you’ll find few people calling out someone for “talking rot”. (Using an anachronism like that is a quick way to get an eye-roll.) However, the ability to identify shaded truth, logical fallacies, slanted rhetoric, even demagoguery, or—to quote so many college admissions publications—the ability to “think critically” remains one of the most important things an education should develop and sharpen.

It’s something liberal arts and sciences programs—either liberal arts colleges (like Lawrence University or Williams College) or liberal arts core curricula at some comprehensive universities (like Marquette or Notre Dame)—have been doing for generations.

But the liberal arts had been around long before these academic upstarts started delivering them. Since the time of the Roman Empire, the liberal arts were those things studied by free persons—grammar, dialectic, rhetoric, geometry, arithmetic, music, astronomy.

You might recognize their allegorized images (below) from their class picture, painted in the late 16th century by Flemish painter, Maarten de Vos. 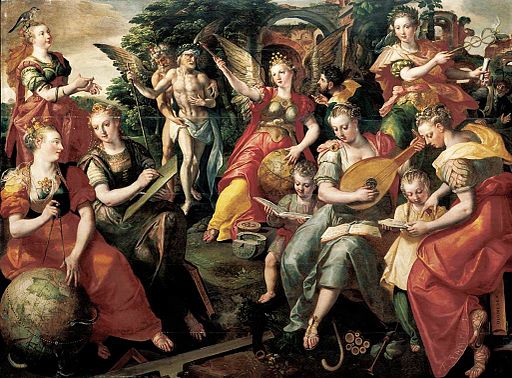 A liberal arts and sciences education tests our ability to investigate and understand the nature of an organism, the application of a theory, the behavior of a crowd, the principles of a political system, the meaning of a poem, the causes of an event, the consequences of an argument, or the composition of a symphony. They help us see the complexity of both/and, rather than either/or.

At its best, the study of the liberal arts and sciences develops the abilities to find similarities among dissimilar things, common ground among the uncommon, meaning in the midst of meaninglessness. It can transform one—as David Burrows, provost of Lawrence University, often says—from “merely reflecting the light of others to generating one’s own light.”

“Sure. That’s the nice stuff you find in college admissions brochures,” people will often challenge. “But will it help you get a job?”

We’ll take up that challenge tomorrow. (Rest assured; we have an answer.)

Note: A long (really long) version of this appeared in an article I wrote for the American Society of Quality in June 2011. IHRTLUHC on myself, I suppose.

It’s a truism to say that the current financial upheavals in the world have prompted many of us to feel insecure about the future. Predictably, the media have begun to run stories about students who are changing their college choices because (according to the media), “they can no longer afford to attend the higher-priced private colleges they originally were interested in.” It’s easy to find these students and to report their stories–there’s dramatic tension in them, so they lend themselves well to storytelling. But, as is so often the case with media stories about higher education, they are also dangerously simplistic.

The most unfortunate part of these stories is that they encourage other students (and their families) to alter their college choices inappropriately. These stories focus on the cost of college–or, more accurately, on the perceived cost of college–as the primary factor on which to base a college choice. In doing so, they distract attention from what should be the primary factor–that of how good a match a particular college is for a particular student. Students who follow the path the media has set out for them are encouraged to “settle” for colleges that are not perhaps the best match for them.

The scenario typically offered by the media makes the assumption that a student’s family would pay the entire cost of college and, confronted by a decline in its financial resources, the family (and the student) is relegated to choosing a lower-priced college. At most high-priced private colleges, many (if not the majority of the) families cannot afford the full cost of education, so they receive financial aid to allow them to do so. If a family in this group has suffered a financial downturn, it will now be eligible for more financial aid than it might have been previously. Similarly, if a family that previously could have afforded the entire cost of education suffers such a downturn and no longer can afford the entire cost, it will now join the ranks of those who qualify for need-based aid.

Certainly, there is a small number of families who, like those featured in the media, have suffered a substantial downturn, but still will not qualify for need-based aid even at a private college. Those families are probably among the top 3 to 5 percent of the nation’s wealthiest families. So even though the cost of college is now higher in relation to their financial circumstances, the argument that they “must” choose a lower-priced college really is not accurate. They may “decide” to choose a less expensive college–but it is a choice, not a financial necessity.

College should be viewed as a long-term investment, as it will pay dividends over a lifetime. Students should not abandon their college dreams because of short-term financial challenges. If a student has a great experience at a college that is a great match for him or her, twenty years from now that experience will still be paying great dividends.

Stay tuned… there is more to come.

Dean of Admissions and Financial Aid