I poked my head outside my office just as our lunch hosts were preparing to take a gaggle (I think that’s the term) of prospective students over to the Warch Campus Center for lunch. As is the usual custom, our students introduce themselves and where they’re from. (This particular group included Lawrentians from Milwaukee, Madison, the Twin Cities, Orange County, and Cameroon.) They then ask the prospective students clustered around our visitor lobby (pictured below)  to introduce themselves and where they’re from.

Today’s visitors for lunch (note: this doesn’t include the other 25 people who visited at other times today):

That’s right: 12,000 miles’ worth of traveling right here to Appleton, Wisconsin. (And we’re thrilled they’re here on such a nice day.)

Those of us who live in Appleton weren’t surprised by the news, but those outside this magical land might be. Lawrence University’s hometown was recently named in the Gallup-Healthways Well-Being Index as one of the top ten cities in the country for health and well-being. Not too shabby, when you consider the composition of the top ten:

Another great shot from the gallery of Rachel Crowl, Lawrence’s gifted photographer, 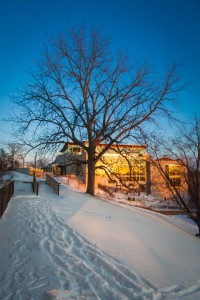 catching the sunset reflecting off the windows of the Warch Campus Center through the branches of a much-loved tree on campus. (Note: there’s way less snow on the ground now than when this photo was taken.)