The Congressional Budget Office is designated as the official scorekeeper for budgetary proposals.  It recently posited that the health insurance reform bill, passed by Congress and signed by the President, would reduce the Federal budget deficit over a 10 year.  Many economists, including Greg Mankiw and yours truly, beg to differ.  See the entry from Mankiw’s blog included below.  Don’t miss the warning label!

A Warning about CBO Scoring

There has been a lot of talk lately about the CBO scoring of the health bill.  Here is one thing people should understand about their numbers: When they estimate the budget impact of a bill like this, they assume the path of GDP is unchanged.

Why does CBO assume no change in GDP?  It is not because the CBO staffers necessarily believe that result.  Rather, it is just one of the conventions of budget scoring.  Their estimates should come with a warning label: 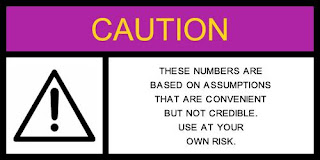