A few weeks ago, Povolny Lecturer and funnyman Yoram Bauman stood up for the “cap and tax” proposal.  He didn’t literally propose a tax, but emphasized that the higher price associated with the cap was the incentive to reduce energy consumption. 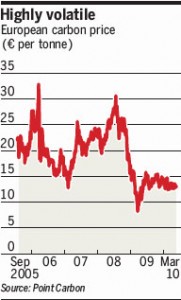 On the other side of the pond, there actually is a cap & trade system in place, and it is really all over the price.  Carbon prices have ranged from €8 to €30, and the volatility can stymie long-term investments.  In other words, there is likely to be an inverse relationship between carbon prices and the payoff to greener (or at least lower-carbon) energy sources.  If investors don’t believe that carbon prices will be high, then green investments simply won’t be as attractive.

Enter the British Conservative Party, which has proposed a “Cap and Tax” of its own.  The basic idea is that because of the tendency for carbon prices to bottom out, a carbon tax would kick in if permit prices went below a certain level.  This would provide some stability to the market, as well as a potential revenue source.

Now, getting a government to make a credible commitment to a long-term tax is another story.