Is China’s Capacity Too Big Not to Fail?

I was having a discussion with one of my colleagues about Chinese economic growth prospects, and I invoked this Nouriel Roubini (a.k.a., Dr. Doom) piece, “China’s Bad Growth Bet.”  The basic argument is that China is overcapitalized and this will lead to problems:

China has grown for the last few decades on the back of export-led industrialization and a weak currency, which have resulted in high corporate and household savings rates and reliance on net exports and fixed investment (infrastructure, real estate, and industrial capacity for import-competing and export sectors). When net exports collapsed in 2008-2009 from 11% of GDP to 5%, China’s leader reacted by further increasing the fixed-investment share of GDP from 42% to 47%.

Thus, China did not suffer a severe recession – as occurred in Japan, Germany, and elsewhere in emerging Asia in 2009 – only because fixed investment exploded. And the fixed-investment share of GDP has increased further in 2010-2011, to almost 50%.

The problem, of course, is that no country can be productive enough to reinvest 50% of GDP in new capital stock without eventually facing immense overcapacity and a staggering non-performing loan problem. China is rife with overinvestment in physical capital, infrastructure, and property. To a visitor, this is evident in sleek but empty airports and bullet trains (which will reduce the need for the 45 planned airports), highways to nowhere, thousands of colossal new central and provincial government buildings, ghost towns, and brand-new aluminum smelters kept closed to prevent global prices from plunging. 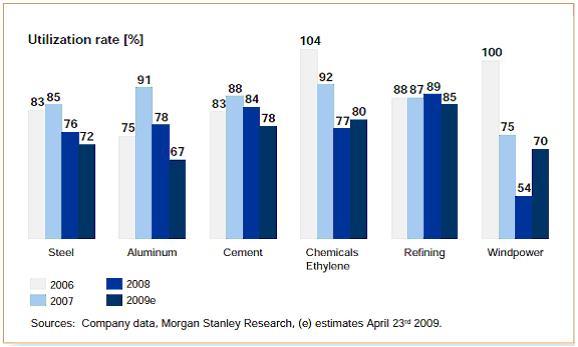 Of course, Roubini’s argument is hardly novel.  The story of Chinese overcapacity is not a new one, as the NYT pointed out a few years back:

Doomsayers warn that it is only a matter of time before excess capacity leads to a wave of bankruptcies and sour loans.

But Mingchun Sun, Nomura’s chief China economist, sees things differently. Projects in the pipeline from the government’s 4 trillion yuan, or $585 billion, fiscal stimulus as well as a revival of private capital spending could propel growth in fixed asset investment, now running at 33.4 percent, to 38 percent or higher in the first half of 2010.

Note that back in 2009 fixed investment was about a third of GDP and Roubini points out that it is now pushing half.  I did a quick search and found concerns with steel, wind turbines, LED chips, and automobiles.

My colleague seemed to take another tack on this.  Indeed, a piece in The Economist presents the principal counter to this point.  To wit, much of this investment is in infrastructure, not in pumping up manufacturing or the export sectors, and therefore the high fixed investment levels have far different implications for whether these investments will pay off.

Given the scale of the spending, some money is sure to have been wasted, but by and large, investment in roads, railways and the electricity grid will help China sustain its growth in the years ahead.

I guess we’ll have to wait and see.

One thought on “Is China’s Capacity Too Big Not to Fail?”