Are U.S. Exchange Rates Too High, Too Low, or Just Right?

Currency exchanges rates between any two countries are determined by a variety of factors including their balance of trade and payments, capital flows (both restricted and unrestricted), and monetary policies.  In a recent posting on Conversable Economics, Timothy Taylor argued that “all exchange rates are bad” (meaning that they generate some negative consequences.)  Although this posting does not take issue with Taylor’s arguments, I conclude that there is no one optimal set of exchange rates, since for any given set, there will be winners and losers, and trade-offs among policy objectives must be made. In short, there is no unique way to determine which exchange rate between countries is “just right.” 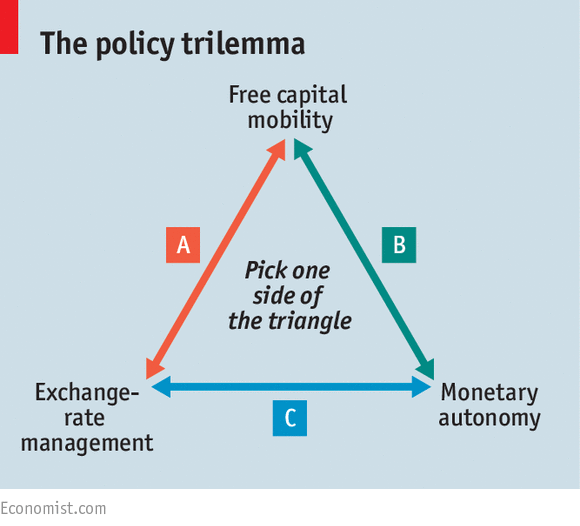 Exchange rate policy and monetary policy are intrinsically linked.  Countries face what has been called the “Impossible Trinity” or “Trilemma”; they can only choose two of the following: independent monetary policy (setting short term domestic interest rates), fixed exchange rates, and open capital markets.  Thus, a country’s desire to float, fix, manage, or abandon how the price of its currency relates to others depends critically on its views toward monetary policy and the flow of capital into and out of the country. Stated differently, to some extent, all countries (including the U.S.) manipulate their exchange rates by the judgments they make about the trade-offs among the three choices.

Tim Taylor argues that all exchange rates have some negative consequences:

As Taylor puts it, “the bottom line is clear as mud.  Exchange rates are bad if they move higher or lower, or moving, or stable.”

For more detail including attempts to empirically answer the question for the U.S. posed in the title go here.