…said the great Lenin—at least that is what we all heard in Soviet countries. I couldn’t find the source of the quote, but it is written in giant letters on buildings, carved into stone in numerous places in the former USSR, so it must be true. Well, the great Lenin was born exactly 140 years ago, on April 22 1870, as Vladimir Ilyich Ulyanov. Happy Birthday, Comrade! The living room window of the apartment where I spent much of my childhood faced the Lenin statue you see on the right. I am sure in a drawer back home there is a black-and-white photo of 10-year-old me bicycling around it… You can’t tell from this picture, but the statue is 4 meters tall.

Lenin, on the other hand, was rather short, but extremely persuasive, as this video will no doubt convince you. He came back from his exile in Switzerland just in time to lead the October Revolution. 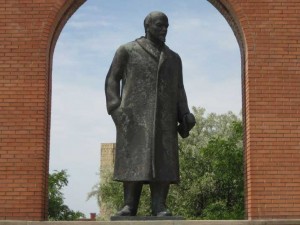 He wrote a lot, including some quotable bits such as “Where the bourgeois economists saw a relation between things (the exchange of one commodity for another) Marx revealed a relation between people.” He died after a stroke, which was confirmed in this study of his brain.

I could say a lot more, but I’d better get back to my five-year plan.