It will be a homecoming of sorts for Mike Axtell when the 12-member, all-male vocal ensemble Chanticleer takes the Lawrence Memorial Chapel stage Friday, April 13 at 8 p.m. for its 2011-12 Lawrence University Artist Series concert.

A 2009 Lawrence graduate, Axtell is in his second season with Chanticleer. The ensemble is widely known as “The Orchestra of Voices,” in part for a repertoire that spans 10 centuries, from Gregorian chant, Renaissance polyphony and Romantic art song to contemporary music, jazz, spirituals and world music.

Now in its 34th season, San Francisco-based Chanticleer has long earned critics’ praises. The New Yorker magazine has hailed the ensemble as “the world’s reigning male chorus.” Winners of four Grammy Awards, including two for their world-premiere recording of Sir John Tavener’s “Lamentations and Praises,” Chanticleer was named the “Ensemble of the Year” in 2008 by Musical America and became the first vocal ensemble ever inducted into the American Classical Music Hall of Fame that same year.

“We’re incredibly excited to have Chanticleer on campus,” said Stephen Sieck, co-director of choral studies at Lawrence. “They combine the tight-knit blend of a four- or five-voice ensemble like the Hilliard Ensemble or The King’s Singers with the vocal prowess and flexibility of a much larger ensemble. Their ability to switch from Renaissance to Broadway and everything in between is exceptional.

“As professional men’s vocal ensembles go, this is like having the Berlin Philharmonic come to the Lawrence Memorial Chapel,” Sieck added. 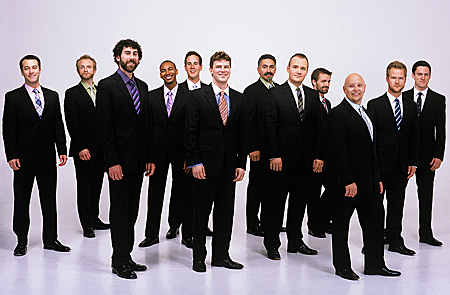 A bass-baritone, Axtell studied in the voice studio of Associate Professor Karen Leigh-Post while at Lawrence, where he earned a degree in B.M. degree in vocal performance and a B.A. degree in theatre. As a student, he sang in the concert choir and performed in numerous theater productions, including the role of the prince in Lawrence’s production of “Cinderella.”

Beyond an exhausting performance schedule, which includes more than 100 performances around the world during the 2011-12 season, Chanticleer is dedicated to music education and outreach. For more than 20 years, the ensemble has offered master classes, lecture recitals and residencies to high school and college students. During their visit to Lawrence, members of the ensemble will hold a master class and work with the concert choir.

Since Chanticleer made its debut in June, 1978, more than 100 men have sung in the ensemble.