Lawrence University — Once Again — Named a College That Changes Lives

For the third straight edition, Lawrence University once again is included in the latest version of the classic college guide “Colleges that Change Lives: 40 Schools That Will Change the Way You Think About Colleges.”

The third edition of the book was released Aug. 28 and is currently available on newsstands, at bookstores and online. 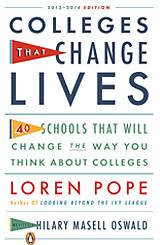 Originally written in 1996 by Loren Pope, the former education editor of the New York Times and re-released in 2006, the 2012 edition is essentially a completely new book, updated by Denver-based education writer Hilary Masell Oswald, who conducted all new school tours and in-depth interviews in selecting the 40 colleges for inclusion. Pope passed away in 2008.

“Making it into the book is an even bigger deal for us this time around because both the writer and the process of review was different than it was for the first edition,” said Ken Anselment, dean of admissions and financial aid at Lawrence. “As a former college admission counselor herself, Ms. Oswald is in a unique position to assess and write about the colleges that were included in the book. She greatly impressed me with her intelligence and care for her subject matter.”

A non-profit organization of the same name was founded shortly after the book was first published to advance and support a student-centered college search process as an antidote to the high-stakes, high-stress environment often associated with the college search. The organization, which offers programs and college fairs to packed houses all over the country, focuses on helping individual students find a fit with the mission and identity of individual colleges.

“Both the book and the organization have great visibility and credibility among prospective students, their families and the college counseling community,” said Anselment. “One of the things the book dispels is the myth that selectivity in admissions means the same thing as quality in education. As its name implies, the Colleges That Change Lives excel at changing the trajectories of students’ lives.”

In her revised edition, Oswald provides valuable information for prospective students on topics ranging from the look and feel of the campus and the quality of dining hall food to the percentage of students who study abroad or go to grad school and what professors have to say about their schools.