Lawrence Featured in 2015 Edition of Fiske Guide to Colleges

Calling it “an unpretentious school that can appeal to both the left and right side of students’ brains,” former New York Times education editor Edward Fiske included Lawrence University in his 31th edition of the nation’s “best and most interesting” colleges. 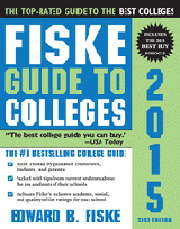 The Fiske Guide to Colleges 2015 is a selective and systematic look at more than 300 colleges and universities in the United States, Canada and Great Britain. Described by USA Today as “the best college guide you can buy,” Fiske produces his guide annually as a resource for college-bound students and their families on which to base their educational choices.

In the book’s profile of Lawrence, Fiske calls the college’s academic climate “intimate and intense.” Among his accolades he cites good relations between Lawrence and the city of Appleton, hails the student body’s wide-spread involvement with volunteerism and credits the college for its “eclectic approach to learning that attracts interested and interesting students from around the world.”

Fiske, who spent 17 years as education editor of the New York Times, also highlights the expertise of Lawrence’s faculty, the breadth of its off-campus study opportunities and Lawrence’s “pristine campus.”

• A list of schools where ACT and SAT scores are optional

Fiske launched his guide as a tool to broaden students’ horizons about American higher education and help them select a college that best coincides with their particular needs, goals, interests, talents and personalities.