Lawrence University students may not realize it, but they have cause to celebrate. They will be the primary beneficiaries of a record-setting fundraising year by the college.

In the second year of Mark Burstein’s presidency, Lawrence set a one-year fundraising record with $34.7 million for the recently completed 2014-15 fiscal year. The previous high mark, $31.4 million, was established in 2008. 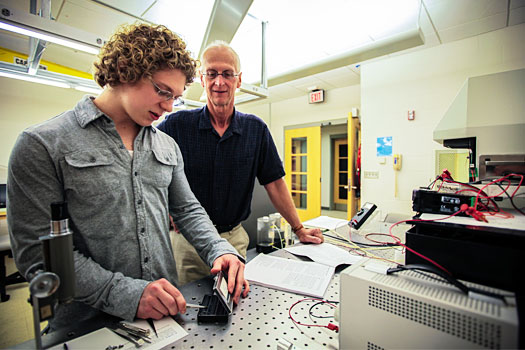 As part of the overall fundraising total, the college also broke the record set last year for the Lawrence Fund, the college’s annual giving program, with $3.8 million.

More than 62 percent of the record fundraising total was designated for scholarships to support Lawrence’s “Full Speed to Full Need” campaign launched last year. The sole purpose of this focused effort is to provide financial aid to students of limited means. The college since has raised $22.6 million toward the full scholarship fund match.

“This record fundraising year is not only a tribute to President Burstein’s clear vision for Lawrence, but also a tribute to the generosity of spirit of those who make up the Lawrence community — students, faculty, staff, administrators, alumni, friends of the college and trustees,” said Susan Stillman Kane ’72, chair of the Lawrence Board of Trustees.

“The central theme of Mark Burstein’s vision, the value of the liberal arts and the importance of our educational mission in this rapidly changing world,” Kane added, “is enhanced by his goals of making a Lawrence education affordable for all students, sustaining a balanced university budget and creating an environment where a diverse student population can thrive. This resounding affirmation of his vision and the outpouring of philanthropic support this past year is unparalleled.”

The college also saw a small increase in its retention rate, which measures the portion of prior year alumni donors who gave again the following year. At 80.3 percent, it was Lawrence’s second-highest mark since 2004. According to Target Analytics Index of Higher Education, the median retention rate for colleges and universities is 62 percent.

“This record fundraising year is not only a tribute to President Burstein’s clear vision for Lawrence, but also a tribute to the generosity of spirit of those who make up the Lawrence community…the outpouring of philanthropic support this past year is unparalleled.”
— Susan Stillman Kane ’72, chair of the Board of Trustees

“This is tremendous news because it provides a clear demonstration of how highly engaged and supportive the alumni community and friends of Lawrence are in securing the college’s future,” said Charles Saunders, ’84, a member of the Lawrence Board of Trustees and outgoing president of the Founders Club, a gift club which recognizes donors who contribute gifts of $1.000 or more annually to the Lawrence Fund. “This allows us to make significant progress on maintaining our affordability, which is the primary issue facing colleges and universities today.”

In Forbes’ 2015 Grateful Grads Index, which ranks colleges by the median amount of private donations per student over a 10-year period, Lawrence ranked 63rd nationally among all colleges and universities and was the highest ranked among Wisconsin schools. 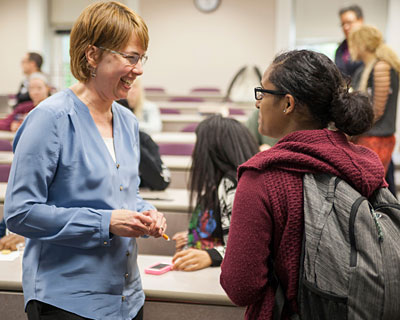 The Lawrence Fund provides close to seven percent of the college’s annual operating budget and helps bridge the gap between what students pay in tuition and actual operating costs. The Lawrence Fund, along with endowment earnings, help reduce each student’s tuition by more than $10,000 per year. In addition to providing student grants and scholarships, the Lawrence Fund also supports everything from classroom resource and athletic equipment to sheet music for conservatory students.

The record-setting fundraising year included another milestone for the college, with membership in the Lawrence-Downer Legacy Circle crossing the 1,000-member threshold. At the end of the 2014-15 fiscal year, membership in the college’s planned giving program jumped by nearly 11 percent over the previous year, growing to 1,016 members.

“The act of including Lawrence in one’s estate plans is arguably the most profound endorsement anyone can make,” said Dave Mitchell, ’71, legacy gift planning co-chair of the Lawrence-Downer Legacy Circle. “The fact that membership in the Legacy Circle increased by more than 10 percent speaks volumes about Lawrence’s special place in our hearts.”