Lawrence University hosts a pair of authors for presentations as part of the 9th annual Fox Cities Book Festival. Both events are free and open to the public. 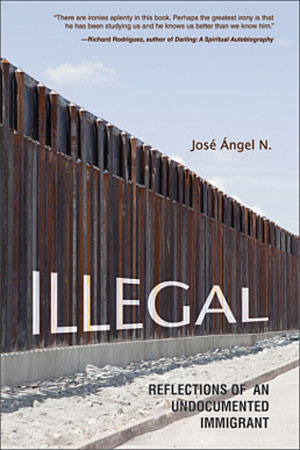 José Ángel N., whose memoir “Illegal: Reflections of an Undocumented Immigrant,” was the featured book for Lawrence’s annual MLK day of service, discusses his experiences of of trying to build a new life in America Thursday, April at 11:10 a.m. in the Lawrence Diversity Center.

Arriving in the United States in the 1990s with a ninth-grade education after crawling through a tunnel from Tijuana, Mexico, N. made his way to Chicago, where he found access to ESL and GED classes. He eventually attended college and graduate school and became a professional translator.

Isolated by a lack of legal documentation, N. found solace in the education America provided. In his memoir, he challenges the stereotype that undocumented immigrants are freeloaders without access to education or opportunity for advancement while detailing the constraints, deceptions and humiliations that characterize alien life “amid the shadows.”

In “The Wild Truth,” McCandless explores her troubled family life growing up, presenting an intensely personal journey to set the record straight about her brother’s tragic story, which was chronicled in Jon Krakauer’s best-selling book “Into the Wild.” McCandless worked with Krakauer on “Into the Wild” as well as with actor Sean Penn, who directed the critically acclaimed 2007 film of the same name. McCandless’ script contributions to the film earned her a screen credit.

In a review of “The Wild Truth,” NPR said it “opens up a conversation about hideous domestic violence hidden behind a mask of prosperity and propriety.”

Garcia, who began writing novels at the age of 10, is the author of the 2014 self-published fantasy fiction book “The Healing Pool.” She was the 2007 first- and third-prize winner of the Jo-Anne Hirshfield Memorial Poetry Award.