The former president of the International Rescue Committee will spend 10 days at Lawrence University beginning May 8 as the college’s Visiting Scarff Professor of International Affairs for 2015-16. 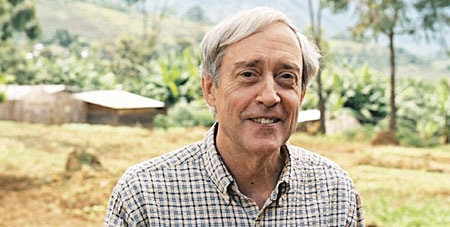 York City-based non-profit organization that responds to humanitarian crises around the world. As president, he oversaw the agency’s relief and rehabilitation operations in 25 countries as well as refugee resettlement and assistance programs throughout the United States.

During his Scarff appointment, Rupp will guest lecture in several government department classes. He also will deliver a free, public address, “Passionate Conviction and Inclusive Community,” Tuesday, May 10 at 8 p.m. in the Wriston Art Center auditorium.

The author of six books, Rupp’s public lecture will be based in part on his most recent book, 2015’s “Beyond Individualism: The Challenge of Inclusive Communities,” in which he Rupp pushes modern individualism to recognize the role of communal practice in the world. He advocates for new solutions to global challenges ranging from conflicts in the developing world and income inequality to climate change and mass migration.

An ordained Presbyterian minister with bachelor’s degrees from Princeton University and Yale University and a Ph.D. in religion from Harvard University, Rupp led two of the country’s premier institutions. Prior to heading the IRC, he served as president of Columbia University for nine years (1993-2002) after serving as Rice University’s president from 1985-1993.

Since leaving the IRC, Rupp has served as senior fellow at the Carnegie Council for Ethics in International Affairs and was elected chair of the International Baccalaureate Organization in 2015.

Besides “Beyond Individualism: The Challenge of Inclusive Communities,” Rupp is the author of “Christologies and Cultures: Toward a Typology of Worldviews,” “Beyond Existentialism and Zen: Religion in a Pluralistic World,” “’Culture Protestantism’: German Liberal Theology at the Turn of the 20th Century,” “Commitment and Community,” and “Globalization Challenged: Conviction, Conflict, Community.”

The Scarff Memorial Visiting Professorship was established in 1989 by Edward and Nancy Scarff in memory of their son, Stephen, a member of the Lawrence class of 1975, who died in an automobile accident in 1984. It is designed to bring civic leaders and scholars to Lawrence to provide broad perspectives on the central issues of the day.