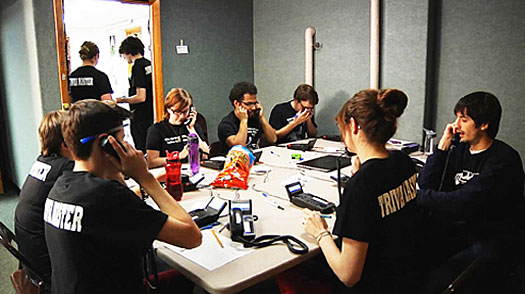 The Madison-based team, featuring a dozen Lawrence alumni, racked up 1,376 points out of a possible 1,800 during the 50-hour contest that ended at midnight Sunday, Jan. 29, to edge The Cailloutastrophe, which finished second with 1,358 points. Two-time defending champions Hobloblins of Little Minds settled for third with 1,313 points. A total of 80 off-campus teams competed.

Team Drinking in the Lounge easily won on-campus title with 1,284 points among 18 on-campus teams. Homemaker, wife and mother to 3 beautiful children (1,153 points) and Cult of the Pink Shoes (1,110) finished second and third.

For their winning efforts, Holy Broman Literary Society and Team Drinking in the Lounge were awarded first-place prizes of an unopened can of Red Dog beer, and a leg ripped from a stuffed animal monkey, respectively.

Unlike last year, no team was able to answer this year’s “Super Garruda,” the contest’s final, virtually impossible question: A number of Lawrentians have taken trips to China to study sustainability. In the third city visited on their 2015 trip, there is a bar on the 10th floor of a building near the intersection of Minquan Road and Fushui North Road. In the fifth issue of a magazine they distributed last July, which features a pink robot on the cover, what artist is shown on page eight?

While no one was able to come up with correct answer — Dickid — one on-campus team, with the help of a Chinese-speaking friend, was able to track down the bar’s manager and learn the name of the magazine, but ran out of time before learning the artist’s name.