Lawrence University violinist Wen-Lei Gu will be the guest soloist Saturday, Oct. 7 when the Fox Valley Symphony Orchestra opens its 2017-18 season with an all-Russian program. The 7:30 p.m. concert will be held at the Fox Cities Performing Arts Center in downtown Appleton.

Gu, an award-winning and internationally popular soloist, will be featured in a performance of Shostakovich’s emotionally challenging and technically brilliant Violin Concerto No. 1. 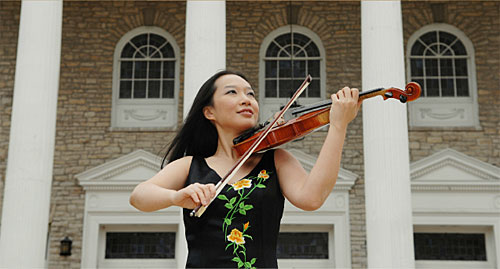 Brian Groner, the FVS’s music director since 1995, calls Gu “phenomenal” and says he was “charmed” the first time he had a chance to hear her play.

“Her playing was (and remains) so elegant and so sophisticated,” says Groner. “It has been my distinct privilege to work with her on almost 10 different occasions.’

A native of China, Gu came to the United States as a 13-year old after winning first-place prizes in both violin and piano state competitions at age seven. When she was 12, she was named gold medalist in China’s Fourth National Violin Competition.

Gu, an associate professor of music, joined the Lawrence faculty in 2006. She has performed throughout the world, including the Bach Festival at Carnegie Hall in commemoration of the 250th Anniversary of Johann Sebastian Bach’s death, the Kennedy Center for the Millennium Concert Series as a guest soloist with the Shenzhen Symphony Orchestra and China Beijing Philharmonic on concert tours of Europe.