The City of Appleton’s new Lawe Street Trestle Trail is about to open, marking the latest step forward in the development of beautiful trails and parks near the city’s downtown and the Lawrence University campus.

The abandoned railroad trestle has been transformed into a 10-foot-wide trail that spans the Fox River at the southern edge of campus. Part of a $1 million-plus city investment, the trail is nearing completion and is expected to open to the public in early August.

“The City of Appleton has been working with CN Railroad for over 10 years in an effort to acquire the trestle to expand our riverfront trail system and to provide a trail connection to both sides of the river,” said Dean Gazza, the city’s director of parks, recreation, and facilities management.

The trestle trail, complete with LED lighting, is 575 feet long, with composite plank decking. There are two cantilevered scenic overlooks in the middle. The trestle is 14 feet wide; the asphalt trail 10 feet wide. It stretches from Lawe Street south of the river to E. John Street on the north bank, providing access to the North Island Trail – immediately across the river from the Lawrence campus – and the nearby Newberry Trail.

From Lawrence, the new trestle trail is easily accessible along Lawe Street, south of the Warch Campus Center, and along E. John Street, just east of campus.

In addition to connecting with other trails, it provides an alternate way to access the city’s downtown district. It’s an important piece of development along the river that, according to city plans, will soon include the riverside Ellen Kort Peace Park and the nearby Edison Trestle Trail, both expected to be developed over the next two years.

It all adds to the amenities surrounding the Lawrence campus, itself a signature piece of the Appleton landscape, anchoring the east end of the downtown.

Appleton features 29 parks (and a 30th in development) as well as numerous other hiking and biking trails.

Besides the new Lawe Street Trestle Trail, here are four trails and four parks near campus worth checking out on foot or bike:

A beautiful stretch of trail, arguably the most popular in the city, Newberry Trail runs 2.4 miles along the Fox River. It’s easily accessible from campus along Lawe Street, cutting through wooded property and providing gorgeous river views. Photo opportunities are plentiful. To the east, the trail connects with Telulah Park and then the CE Trail. To the west, it connects to S. Olde Oneida Street and the refurbished industrial flats.

This trail features six miles of dedicated asphalt running alongside County CE from the east side of Appleton to Kaukauna. It can be accessed from campus by following the Newberry Trail to the east. Once you pass Telulah Park, the trail will cut through the east side of Appleton before beginning its long stretch running parallel with the county highway. Plenty of open country and scenic stops along the way, as well as trail access to a bike shop for any repair or refueling needs.

This trail is a nearly half-mile loop immediately across the Fox River from the Lawrence campus. It’s an easy connection to the Newberry Trail and provides gorgeous views of the campus from across the river. Great spots for scenic pics of campus.

A nearly half-mile trail that runs through Peabody Park and connects to Rankin Street and Wisconsin Avenue to the north. It’s a short trail, but it’s a handy and scenic connection if you want to visit the part of the city that includes the spacious and beautiful Riverside Cemetery and the Refuge Foundation for the Arts, a nonprofit artistic haven operated out of a converted monastery that often partners with Lawrence’s Conservatory of Music. You can connect to the trail at Peabody Park, which is located along the river less than a mile north of campus, along N. Green Bay Road.

This eight-acre park is almost an extension of the Lawrence campus. It’s located immediately north of campus and is home to numerous annual festivals and art fairs. It features a beautiful fountain adorned with a sculpture of dancing children. It’s surrounded by historic homes that make up the City Park Historic District.

Located a few blocks west of campus, this park is built in a ravine on the south edge of the city’s downtown. It recently underwent a major renovation, reopening in the summer of 2019. It’s nestled against the Fox Cities Exhibition Center and features, among other amenities, a large amphitheater. Look for live music and festival opportunities in the spring, summer, and fall and ice skating in the winter.

At 38 acres, this is Appleton’s second largest park. It’s located a mile from campus. A trail along the river, which allows for fishing opportunities and a kayak launch, connects to the Newberry Trail. The park includes a skate park and a disc golf course, among other amenities. There are two easy routes from campus to get there: Walk or bike across the College Avenue bridge and hang a left on Walter Avenue or head south on Lawe Street and take the Newberry Trail to the east.

This park, one of Appleton’s oldest, stretches from the river up through a beautiful ravine. It’s accessible from campus by a short, scenic walk or ride to the north along N. Green Bay Road. It’s a great day-trip get-away within a mile of campus.

Dave Cieslewicz, executive director of the Wisconsin Bike Fed, examines the benefits of biking — even to those who never get on a bicycle — in the Lawrence University address “The Bicycle: Freedom for Everyone.”

Cieslewicz will explore the reasons why bicycles provide universal benefits, even to those who don’t like them, why they generate such strong feelings and what the future might hold for bicycles and the people who ride them.

Bicycles offer freedom of movement and freedom from the high cost of motor vehicle ownership. According to Cieslewicz, it’s not about being against certain modes of travel, but about giving people real freedom of choice. For cyclists, that means more safe places to ride.

As the mayor of Madison from 2003 to 2011, Cieslewicz led efforts to make the city one of the country’s most bike-friendliest places. He is the founder of the 1000 Friends of Wisconsin, a nonprofit organization focused on land use and transportation policy. 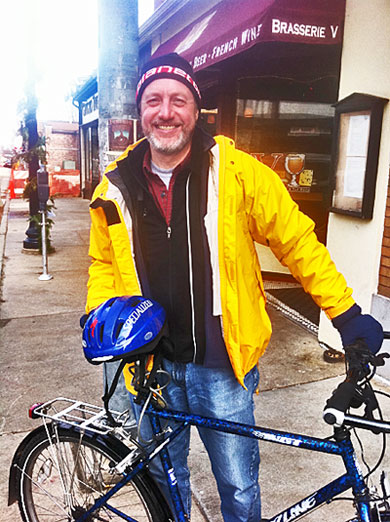 Cieslewicz’s appearance is sponsored by the Barbara Gray Spoerl Lectures in Science and Society. Established in 1999 by Milwaukee-Downer College graduate Barbara Gray Spoerl and her husband, Edward, the lectureship promotes interest and discussion on the role of science and technology in societies worldwide.