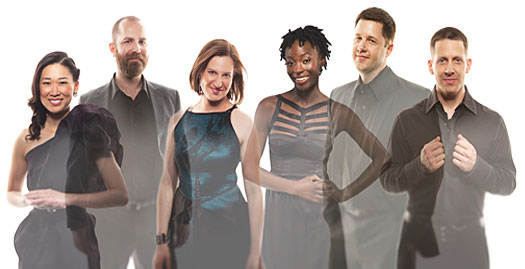 “Eighth blackbird brings a level of engagement to their performances that is singular and remarkable,” said David Bell, associate professor of music at Lawrence who teaches clarinet. “I can’t think of another ensemble that brings more to the stage, or offers more to their audience. Regardless of the kind of music you gravitate toward, hearing eighth blackbird will make you want more of whatever they might be doing that night, which is probably going to be completely different the next time you hear them.”

“Eighth blackbird brings a level of engagement to their performances that is singular and remarkable. I can’t think of another ensemble that brings more to the stage, or offers more to their audience.”
– David Bell

In his review for New York City’s WQXR of the ensemble’s latest project, “Filament,” released this September, Daniel Stephen Johnson said “As meticulous as their programming may be, on concert or on recordings, it is seldom as intensely focused as it is on their latest album.”

Founded in 1996 at, the group derived its name from the eighth stanza of Wallace Stevens’ 1917 poem, “Thirteen Ways of Looking at a Blackbird.” All former students at the Oberlin Conservatory, they hold Ensemble-in-Residence positions at the University of Chicago and the University of Richmond.