After delivering an invited talk at Oxford University on the causes and consequences of the 2014-15 Ebola epidemic on April 20, Lawrence University political scientist Claudena Skran took a trip to ground zero of the disease — Sierra Leone.

Skran’s visit to the West African nation that has suffered nearly 3,900 deaths since the outbreak began last spring, was as much as goodwill ambassador as it was as scholar on refugees and humanitarian aid. 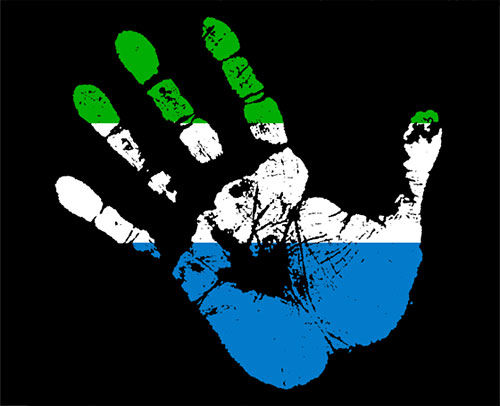 At the top of Skran’s itinerary was presenting a donation for more than $5,000 to the Calaba Town Community Aid Organization to assist children orphaned as a result of Ebola. The money was raised earlier this year through the collective efforts of numerous Lawrence student organizations on behalf of KidsGive, an organization founded by Skran to educate U.S. students about African life and cultures. It promotes informed giving effort while providing Sierra Leone children with opportunities to learn and become the country’s next generation of leaders.

In total, students raised more than $6,000, some of which was donated to other schools and programs in Sierra Leone.

“I’m so proud of the way Lawrence students responded to the Eblola outbreak,” said Skran, professor of government and Edwin & Ruth West Professor of Economics and Social Science. “While others just stepped away, our students stepped up and reached out to those in need.

“What really makes this effort special in my view is the way in which it was accomplished,” Skran added. “We have a campus that is known for individual achievement and for distinction by smaller groups, especially in music and athletics, but we had more than 30 different student organizations working together, showing true collaboration on this effort. This is a such a wonderful example of what can be accomplished when groups of students unite in action for a common cause.”

In February, student members of the KidsGive on-campus board — Liz Barthels, Anna Bolgrien, Kobe Lewin, Kara Vance and Wesley Varughese — organized a “Help Ebola Orphans” campaign. Reaching out to campus organization with which they were connected, the board members asked each group to set a goal of raising $100, a sum that would enable a student in Sierra Leone to attend school, have food and water and be able to participate in any scholarship opportunities while in school. Organizers also reached out to faculty members and the athletic department in the hope of getting some of Lawrence’s varsity teams involved.

The response, according to Varughese, KidsGive president, far exceeded expectations.

“Most board members thought we would only get one or two thousand dollars and we would have to push just to get that amount,” said Varughese, a junior from La Villa, Ill., who was elected president of LUCC in January. “In the first week alone, we collected more than $3,000.”

The student organizations groups raised funds through a variety of methods. Members of the Wriston Art Collective created art pieces and sold them through an art bazaar. Some of the bartenders in the Viking Room donated all of their tips to the cause. A sorority held a bake sale in the library. One board member reached out back home, resulting in a $400 donation from the Greendale Community Church. Several of the coaches in the athletic department promised to match whatever their teams raised, helping the swim team, fencing team and track team finish as the top three groups, respectively, that raised the most money.

“I’m so proud of the way Lawrence students responded to the Eblola outbreak. While others just stepped away, our students stepped up and reached out to those in need.”
— Professor Claudena Skran

“We’ve been talking at LUCC about what can we do to provide for collaborative efforts and I think it just took one student organization to take the initiative and show that cooperation is really possible with just a few people,” said Varughese.

As other students saw how passionate the KidsGive members were in reaching out to all facets of the Lawrence community, Varughese said that inspired them to come together.

“I got the feeling the student organizations were like, ‘If they took their time to reach out and do all this, why don’t we do it together,’” said Varughese. “In the end it became a really good collaborative effort.”

Skran’s latest trip to Sierra Leone — she has visited the country nearly 20 times since joining the faculty in 1990 — came just two days after delivering the address “Setting the Stage for Ebola: War, Peace and Refugee Policy” at Oxford University’s Rhodes House.

In her address, Skran, a 1983 Rhodes Scholar herself, discussed why Ebola in West Africa spread so far, so fast and why more attention needs to be given to health care before epidemics break out, especially in post-conflict countries such as Sierra Leone. Both the country’s 10-year civil war (1991-2001) and the post-conflict peace-building contributed to the creation of a weak and vulnerable health system in the country.

She serves as a consultant for the United Nations High Commissioner for Refugees, wrote an op-ed for the Washington Post last December about the impact of Ebola on the medical profession in Sierra Leone and is in the process of writing a book about the Ebola epidemic.

Skran, professor of government and Edwin and Ruth West Professors in Economics and Social Science, presents “Liberal Arts Education: A Catalyst for Thought into Action” Thursday, May 23 at 11:10 a.m in the Lawrence Memorial Chapel at the college’s annual Honors Convocation. She also will conduct a question-and-answer session at 2:30 p.m. in the Warch Campus Center. Both events are free and open to the public.

Skran is the fourth recipient of Lawrence’s annual Faculty Convocation Award, which honors a faculty member for distinguished professional work.

According to Skran,the rocket ship approach provides a foundation for students to help them “blast off” into life in hopes they will fly high and achieve much. This model, which sees thought and action as separate stages of development, has worked for much of the last half century, but a lack of flexibility and entrepreneurism is threatening its future.

In the catalyst model, liberal arts colleges provide the necessary structure and special ingredients needed to accelerate reactions, which produce unexpected, sometimes unplanned, results that are largely student driven and bring “thought” and “action” closer together.

The annual Honors Convocation publicly recognizes students and faculty recipients of awards and prizes for excellence in the arts, humanities, sciences, social sciences, languages and music as well as demonstrated excellence in athletics and service to others. Students elected to honor societies also will be recognized.

A specialist in international relations, with research interests in refugee issues, the United Nations and non-government organizations, Skran joined the Lawrence faculty in 1990.  She is the author of the book “Refugees in Interwar Europe:  The Emergence of a Regime.”

In 2005, Skran was awarded a Fulbright Scholars grant to study the role of NGOs in refugee resettlement in post-civil war Sierra Leone. She has subsequently made numerous return trips to Sierra Leone, often with Lawrence students for research projects. She is the founder of the NGO KidsGive, a scholarship program that supports nearly 500 students at three different schools in Sierra Leone.

A 1983 Rhodes Scholar, Skran earned a bachelor’s degree in social science from Michigan State University and her master’s and doctorate degrees in international relations at Oxford University.