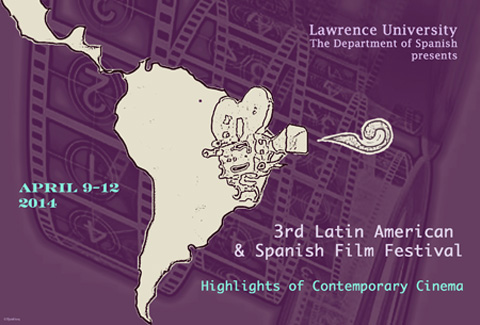 Each film, shown in Spanish with English subtitles in the Warch Campus Center cinema, is free and open to the public.

Prior to the film screening on Friday, April 11, a panel discussion with artist-in-residence and award-winning filmmaker Catherine Tatge and student filmmakers will be held at 4:30 p.m. in the cinema.

“I was intent on bringing some of the best and most sought-after films of the year,” said Rosa Tapia, associate professor of Spanish and organizer of the festival. “Most are regional premieres, which means we beat Madison, Milwaukee and even Chicago in many cases. Our audience will be able to enjoy five films Chicagoans will have to wait until the International Film Fest in October to see.”

Tapia noted the two filmmakers who will be visiting the festival directed their countries’ respective entries for the Academy Awards nominations in the Best Foreign Film category.

“I think our audience will be thrilled to meet these two talented artists, as they tell us about their successful films and their craft,” said Tapia.

The festival line-up:
• Wednesday, April 9, 5 p.m., “After Lucia” (Mexico, 2012)
“After Lucia” follows a man’s relationship with his 17-year-old daughter after his wife’s death. Based on a mixture of several real cases, the film was the 2012 winner of the Prize of Un Certain Regard at the Cannes Film Festival.

• Thursday, April 10, 5 p.m., “La Playa D.C.” (Colombia, 2012)
Tomas, after fleeing Colombia’s Pacific coast during the war, must search for his younger brother after he disappears. The film was Colombia’s entry for the 2014 Academy Award nomination for Best Foreign Language Film. A Q & A with the film’s director,  Juan Andrés Arango, follows the screening at 6:30 p.m.

• Thursday, April 10, 8:30 p.m. “So Much Water” (Uruguay, 2013)
A divorced Uruguayan man tries to keep his two rebellious children entertained during a rain-sodden vacation. The directorial debut of Ana Guevara, it was awarded Best Debut Film at the 2013 Miami International Film Festival.

• Friday, April 11, 5 p.m. , “The Cleaner” (Peru, 2012)
A forensic cleaner becomes accountable for an 8-year-old orphan who has been left behind in the middle of an epidemic crisis in Lima. The film was Peru’s entry for the 2014 Academy Award nomination for Best Foreign Language Film. A Q & A with the film’s director, Adrián Saba, follows the screening at 6:30 p.m.

• Friday, April 11, 8:30 p.m., “White Elephant” (Argentina, 2012)
Two priests face a variety of problems as they work in a Buenos Aires slum. The film was nominated for Un Certain Regard Prize at the 2012 Cannes Film Festival.

• Saturday, April 12, 5 p.m. “Gloria” (Chile, 2013)
Gloria, a free-spirited older woman, faces the realities of her whirlwind relationship with a former naval officer whom she meets out in the clubs. The film was Chile’s entry for the 2014 Academy Award nomination for Best Foreign Language Film. Paulina Garcia won a best actress Golden Bear Award at Berlin’s International Film Festival.