Amid growing global concerns of displaced persons and their impact on the countries they’re entering and those they’re leaving, Lawrence University will honor an international expert on refugee policy Sunday, June 11 at its 168th commencement.

Gil Loescher, a visiting professor at the University of Oxford’s Refugee Studies Centre, will be awarded an honorary Doctor of Humane Letters degree during commencement ceremonies that begin at 10:30 a.m. on the Main Hall green. Loescher also will deliver the principal commencement address.

This will be Loesher’s second honorary degree. He received an honorary doctorate of law in 2006 from the University of Notre Dame.

Lawrence is expected to award 344 bachelor degrees to 335 students from 28 states, the District of Columbia and 17 countries. A live webcast of the commencement ceremony will be available at go.lawrence.edu/commencement2017.

Peter Thomas, associate professor of Russian Studies at Lawrence, will deliver the main address at a baccalaureate service Saturday, June 10 at 11 a.m. in the Lawrence Memorial Chapel.

The baccalaureate service and commencement exercise are both free and open to the public.

Retiring faculty member Bonnie Koestner, associate professor of music, will be recognized with an honorary master of arts degree, ad eundem, as part of the ceremonies.

During a 40-plus-year career, Loescher has established himself as an authority on refugee policy. Prior to joining Oxford’s Refugee Studies Centre in 2008, Loescher held appointments as Senior Fellow for Forced Migration and International Security at the International Institute for Strategic Studies in London and as senior researcher at the European Council on Refugees and Exiles.

According to Loescher, containing refugees in camps prevents them from contributing to regional development and state-building.

“Refugees frequently have skills that are critical to future peace-building and development efforts, either where they are or in their countries of origin following their return home,” he has said.

A miraculous survivor of a suicide bomber attack in Baghdad, Iraq, Loescher has a long history of working with the United Nations, especially the UN High Commissioner for Human Rights.

In August, 2003, Loescher was in the office of then UN High Commissioner for Human Rights Sérgio Vieira de Mello at the Canal Hotel in Baghdad when a suicide bomber detonated a truck bomb outside the building. The blast killed more than 20 people and injured more than 100.

“Refugees frequently have skills that are critical to future peace-building and development efforts, either where they are or in their countries of origin following their return home.”
— Gil Loescher

Loescher was one of nine people in the office, seven of whom were killed instantly. He and Vieria de Mello were trapped in the debris of the collapsed building as American soldiers spent more than three hours trying to rescue them. Vieria de Mello died before he could be extricated. While Loescher survived, his legs were crushed and had to be amputated by the soldiers. 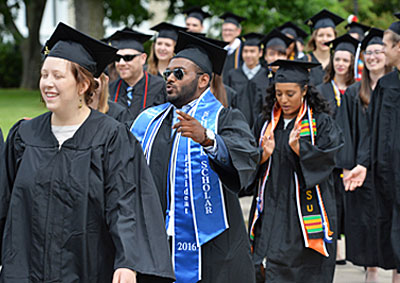 He also has served as a visiting fellow at Princeton University, the London School of Economics and the Department of Humanitarian Affairs at the U.S. State Department.

He has been the recipient of numerous honors and research grants from organizations ranging from the Ford Foundation and the MacArthur Foundation to the Fulbright Program and the British Academy.

A graduate of St. Mary’s College of California, where he earned a bachelor’s degree in history, Loescher also holds a master’s degree in politics and Asian studies from the Monterey Institute of International Studies and a Ph.D. in international relations from the London School of Economics.

An expert on immigration law will lead a community forum at Lawrence University to address questions and concerns regarding the latest developments.

In her presentation, Cole will discuss issues ranging from the president’s latest executive order, the unstable immigration environment and travel restrictions to how employers are and should be responding, the reduction in admitted refugees and border searchers for travelers entering the United States.

Cole, who also serves as immigration counsel to the California law firm Hirschfeld Kraemer LLP, is a member of the American Immigration Lawyers Association (AILA) and serves as the senior editor of AILA’s annual Immigration and Nationality Law Handbook.

She is the current chair of the Board of the Vermont Council on World Affairs, which is a member of the World Affairs Councils of America, a network dedicated to educating, inspiring and engaging Americans in international affairs and current critical global issues.

Cole earned a bachelor’s degree in government from Cornell University and her J.D. from Albany Law School of Union University in New York.

It hasn’t taken Lawrence University officials long to find a use for the long-vacant former bank building the college recently purchased.

Lawrence has entered into a partnership with World Relief Fox Valley, the Fox Cities Kiwanis and the city of Appleton to use the former North Shore Bank building, 320 E. College Ave., as a donation collection point for an expected 75 refugees who will be relocating to Appleton in the coming year.

Under terms of an agreement signed Monday (2/10) afternoon, Lawrence will loan the 10,800-square-foot, two-story office building to World Relief Fox Valley free-of-charge for six months or until the first week of August 2014.

“Partnering with these three organizations on this important initiative is a wonderful opportunity to put our newest addition to campus to good use,” said Jacob Woodford, assistant to Lawrence President Mark Burstein. “We were fortunate that the timing was right. Lawrence University is proud to have a hand in welcoming new residents to the Fox Cities.”

The Fox Cities Kiwanis, who directed a community-wide collection 10 years ago for the Hmong refugee resettlement, will again lead a furniture drive. Fox Valley residents will be able to donate a variety of “apartment type” furnishings, ranging from couches, lamps and chairs to night stands, dressers and kitchen tables. The community collection will assist a contingent of 135 refugees from Congo, Iraq and Myanmar who are expected to arrive in the Fox Valley over the course of the next eight to nine months. In addition to those refugees resettling in Appleton, others are resettling in Neenah and Menasha.

Three collection times have been established for anyone wishing to make a donation: Saturday, Feb. 22 and Saturday March 1 from 9 a.m. – 1 p.m. both days; and Tuesday, March 4 from 4 p.m.- 7 p.m. Donations can be dropped off at the back door facing the alley.

“We are really excited that Lawrence has given us the opportunity to make this happen.” said Jean Long Manteufel, a long-time Kiwanis member who is coordinating the organization’s refugee collection efforts. “What better way to welcome our new neighbors, than to provide them with all the furniture that they need to start life in their new country? The added benefit is that the donations come from the community itself. That really says ‘Welcome.’”

Kathy Flores, diversity coordinator for the city of Appleton, saluted Lawrence and Kiwanis for their cooperation in providing space for the refugee donation drive.

“This spirit of generosity and collaboration really highlights what makes Appleton and the Fox Cities a great place to live,” said Flores. “It is because of efforts like this that I feel confident Appleton will be a very welcome home for our new community members who have already started arriving. We look forward to working with this compassionate community as they respond to the need for donations.”

The Oshkosh-based World Relief Fox Valley is coordinating the refugees’ resettlement to the area. According to its website, the organization assists refugees with a thorough orientation to life in America as well as a host of vital services, including providing furniture and basic household items, arranging medical visits, helping with the acquisition of refugee benefits, enrolling in ESL classes and assisting with job skill and employment services.

“We are very grateful to Lawrence University for opening up doors for us to be able to use the building,” said Myriam Mwizerwa, World Relief Fox Valley director. “We collect donation items in order to be able to furnish apartments for refugees and to be able to provide all the necessities that they will need when they first arrive. Storage space is vital to our work and to those in the community who want to help the vulnerable by providing goods that are necessary.”

Lawrence purchased the building in late December 2013. It has been unoccupied for nearly three years since North Shore Bank ceased operations in it.