“This is the news we were hoping for,” said Lawrence University President Jill Beck. “Lawrence is committed to the goal of sustainability and this building is evidence of that commitment. Responsible citizenship is one of the goals of a liberal education and in reducing our impact on the planet we are setting an example for our campus and our community.”

LEED is the nation’s preeminent program for the design, construction and operation of high performance green buildings and offers four levels of certification for new construction: Certified, Silver, Gold and Platinum.

Each level corresponds to the number of points or credits accrued in five green and construction categories that positively impact the project itself and the broader community as verified by the Green Building Certification Institute.

After an extensive review, USGBC determined the Warch Campus Center earned 43 points or credits on its certification scale. A minimum of 39 points is required to reach Gold certification.

“On behalf of the entire design and construction team, we extend our congratulations to Lawrence University on this remarkable achievement,” said Nat Stein, LEED accredited professional and the Warch Campus Center’s project architect for Uihlein-Wilson Architects, Inc., of Milwaukee. “We especially commend the students of Lawrence University who inspired and challenged us to create a building that is environmentally responsible, respectful and beautiful. We are thrilled to be a part of such a meaningful project.”

• low-flow plumbing fixtures to reduce water consumption by more than 30 percent by standards mandated by the Environmental Protection Agency.

• wood certified by the Forestry Stewardship Council that has been harvested with environmentally and socially responsible forest management practices.

In addition, more than 96 percent of construction waste for the building — seven million pounds worth — was recycled and saved from being deposited in a landfill.

KSS Architects of Princeton, N.J. was the design architect of the campus center and Uihlein-Wilson Architects, Inc., the architect of record. The Boldt Company of Appleton served as the project’s general contractor.

APPLETON, WIS. — A gala three-day celebration commemorating the official grand opening of Lawrence University’s Richard and Margot Warch Campus Center culminated with an open house on Sunday that drew more than 1,000 visitors from the community for tours of the building and entertainment by Lawrence students.

“The opening of the campus center is a monumental occasion for Lawrence and will serve to deepen our historic relationship with the surrounding community,” said President Jill Beck. “We invite residents of the Fox Cities and beyond to visit Lawrence often; to celebrate achievements, to engage one another in communication and to enjoy the arts and other activities on campus. As a residential liberal arts college, interaction outside the classroom — with other students, faculty and the local and global community — is central to the achievement of our educational mission.”

The weekend festivities began late Friday afternoon with a welcoming ceremony. Addressing a crowd of more than 100 faculty, staff, alumni and friends of the college were Board of Trustee members Jeff Riester ’70 and Don Koskinen ’50, Lawrence President Jill Beck and the building’s namesakes, President Emeritus Richard Warch and his wife, Margot.

As part of Friday’s ceremony, an official portrait of President Warch was unveiled. The portrait will hang in the $35 million, 107,000-square-foot campus center.

The weekend celebration showcased artwork of young Lawrence alumni, screenings of student-produced videos on Lawrence’s sustainability efforts, an activities fair highlighting the campus and community efforts of numerous student organizations and live performances of several student groups, including the Sambistas, a Brazilian percussion ensemble, the folk band Liam O’Brien’s Faithless Followers, the Melee Dance Troupe, the student pep band and a demonstration of the art of Japanese self-defense by the student organization Ninjitsu.

The campus center cinema showed three movies over the weekend that included Lawrence connections. The restored version of the 1923 silent movie “The White Sister” featured a musical score composed and recorded last year by Garth Neustadter ’09 for Turner Classic Movies. The 1926 film “The Black Pirate” featured an original piece of music written by David Werfelmann ’06 as part of his senior experience project. And the documentary “Mary and Bill” told the story of two remarkable and inspiring athletes, Mary Stroebe, a 1940 Lawrence graduate who began competing in triathlons in her mid 80s, and Bill Wambach, a 1946 Lawrence graduate, who competed as a high jumper at the age of 83.

“We were absolutely delighted with the response for the entire weekend, especially the outpouring from the Fox Valley community which expressed such interest and curiosity about the building,” said Lynn Hagee, the campus center project coordinator. “We certainly feel we launched the building in grand style.”

APPLETON, WIS. — After nearly 20 years of discussions, planning and revisions, the most ambitious building project in Lawrence University history and one of the most environmentally friendly higher education buildings in all of Wisconsin will bask in the spotlight of a grand opening ceremony.

Lawrence will commemorate the completion of the Richard and Margot Warch Campus Center with a weekend celebration beginning Sept. 18-20, culminating in a community open house on Sunday, Sept. 20 from 1-4 p.m.

In addition to tours of the building, the community open house on Sunday will feature student music and dance performances, an alumni art exhibition and a screening of the documentary film “Mary and Bill,” which tells the inspiring story of two remarkable athletes: Mary Stroebe, a 1940 Lawrence graduate who began competing in triathlons in her mid 80s, and Bill Wambach, a 1946 Lawrence graduate, who competed as a high jumper at the age of 83. Rik and Margot Warch will be on hand to greet visitors from 2-3 p.m.

Lawrence will provide free shuttle bus service to the campus center for Sunday’s open house from the Soldier’s Square and City Center parking ramps in downtown Appleton. Signage will be posted at each ramp’s main entrance. 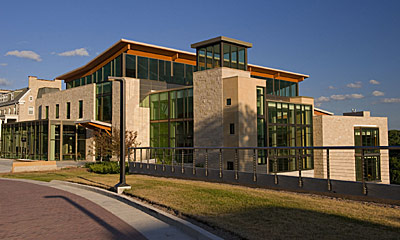 A complete weekend schedule can be found here.

According to Beck, the building has surpassed expectations.

“The design of the campus center is so clever,” said Beck. “From the front, it blends magnificently with other campus buildings. From the back it almost blends seamlessly with nearby Sage Hall, and that’s helped with the sense of coherence. We’ve linked both sides of the campus together. We’ve got the academic hub and the social hub on each side of Lawe St. and the designs make it all seem very harmonious and attractive.”

With striking vistas of the Fox River and vast, light-filled spaces, the four-story building showcases the scenic beauty of its location. Among its amenities are:

• a convenience store and cafe

• 12 reservable venues to accommodate up to 500 guests

In planning the building, a goal of earning LEED (Leadership in Energy and Environmental Design) “Silver” certification was originally sought, but now college officials are hoping the campus center will receive “Gold” certification, the second highest designation on the green building four-level certification system. A review by the U.S. Green Building Council is currently underway and certification results are not expected for several more weeks.

If the Warch Campus Center is LEED certified Gold, it would become the first higher education facility in Wisconsin to achieve that level of certification and one of less than 25 buildings of any kind in the state to be certified Gold according to the Green Building Certification Institute, which administers project certification for commercial and institutional buildings.

Among the Warch Campus Center’s environmentally friendly features are:

• low-flow plumbing fixtures to reduce water consumption by more than 30 percent by standards mandated by the Environmental Protection Agency.

• wood certified by the Forestry Stewardship Council that has been harvested with environmentally and socially responsible forest management practices.

In addition, more than 96 percent of construction waste for the building — seven million pounds worth — was recycled and saved from being deposited in a landfill.

Construction of the Richard and Margot Warch Campus Center is a key component of Lawrence’s current $150 million “More Light” capital campaign. It was made possible by a $16 million leadership gift from an anonymous donor in August, 2006. Work on the center began in June, 2007.

KSS Architects of Princeton, N.J. was the design architect of the campus center and Uihlein-Wilson Architects, Inc., of Milwaukee was the architect of record. The Boldt Company of Appleton served as the project’s general contractor.

APPLETON, WIS. — Lawrence University is sponsoring a mix of contemporary domestic and foreign independent films in a 10-movie series beginning Sept. 16. All films will be shown at 8 p.m. in the Warch Campus Center cinema, 711 E. Boldt Way, Appleton. Admission is free and open to the public. For more information, call 920-832-6837.

• Sept. 16 — “Anvil! The Story of Anvil” (documentary, 2008): At 14, best friends Robb Reiner and Steve “Lips” Kudlow made a pact to rock together forever. They meant it. Their band, Anvil, became the “demigods of Canadian metal.”

• Sept. 30 — “Afghan Star” (foreign documentary, 2009): Four contestants risk it all to become Afghanistan’s favorite singer on “Pop Idol,” but will they win the freedom they hope for in this traditional nation?

• Oct. 7 — “Sunshine Cleaning” (2008): An off-beat comedy in which a single mom, in order to raise tuition money to send her son to private school, starts an unusual business — a biohazard removal/crime scene clean-up service — with her unreliable sister.

• Oct 14 — “Rashomon” (foreign, 1950): Akira Kurosawa’s classic Japanese crime drama that turns an episode of rape and murder into an intriguing examination of the nature of truth.

• Oct. 21 — “FLOW: For Love of Water” (documentary, 2008): An award-winning investigation into what experts label the most important political and environmental issue of the 21st century: the world water crisis.

• Oct. 28 — “Sin Nombre” (foreign, 2009): In a fateful journey of unexpected events, Honduran teenager Sayra reunites with her father to potentially realize her dream of a life in the United States.

• Nov. 4 — “Wendy and Lucy” (2009): Wendy is driving to Ketchikan, Alaska, in hopes of a summer of lucrative work at the Northwestern Fish cannery and the start of a new life with her dog, Lucy. But when her car breaks down in Oregon, the thin fabric of her financial situation comes apart and she confronts a series of increasingly dire economic decisions, with far-ranging repercussions for herself and Lucy.

• Nov 11 — “Bottle Shock” (2008): The story of California’s early days of wine-making, featuring the now infamous, blind Paris wine tasting of 1976 that has become known as the “Judgment of Paris.”

• Nov. 18 “Cidade dos Homens” (foreign, 2007): Best friends Acerola and Laranjinha discover things about their missing fathers’ pasts that shatter their friendship in the middle of a war between rival drug gangs from Rio de Janeiro’s favelas.