The More Light! Campaign Finale in the Media

From the Appleton Post-Crescent

A surprise flash-mob chorus was one of the highlights …

This video celebrates the hundreds of things More Light! brought to Lawrence. 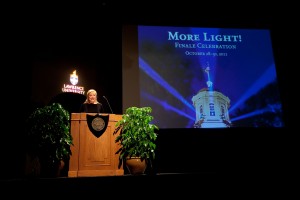 The More Light! campaign began in 2005 with a “quiet phase” and was publicly launched in October 2008 with a goal of $150 million.  Its $160 million total more than doubled Lawrence’s last major capital campaign, which ended in 1997 and raised $66.3 million, surpassing its goal of $60 million.

The campaign finished in a flurry, generating more than $3 million in gifts in the last week to push it over the $160 million mark.

But Harry Jansen Kraemer ’77 was quick to remind Lawrentians that the success of the campaign is not measured in dollars. (Click on the arrow) 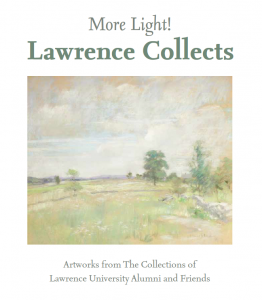 What Did More Light! Achieve? A Summary

When the More Light! campaign was publicly launched in 2008, there were four major goals:

Lawrence University, it’s alumni and friends achieved the goals — and then some.  Here is a brief summary of the highlights: 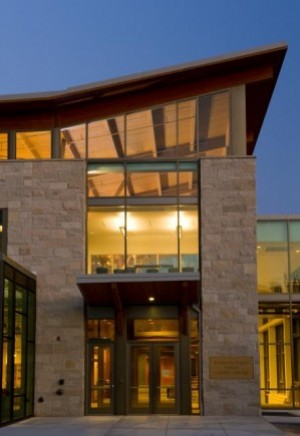 Bart De Stasio, a Lawrence University alumnus and esteemed member of the Biology Department faculty, was recently named the first holder of the Singleton Professorship in the Biological Sciences, the college’s newest endowed professorship. Supported by a $1.5 million gift to the More Light! campaign from Charlot and Dennis Singleton of Atherton, Calif., endowed professorships enable Lawrence to attract and retain faculty who are leaders in their academic fields. And, in the selection of De Stasio for this distinction, the Northeast Wisconsin community also benefits.

Lawrence University biologist Bart De Stasio is on the hunt. Not for trophy bucks or record-size fish. His targeted prey is invasive species —nickel-sized zebra mussels and six-inch round gobies.

As for his preferred weapon of choice: think giant hot tub.

A specialist in aquatic biology and predator-prey interactions, De Stasio, in collaboration with Lawrence students, is conducting an on-going study of the Fox River, looking for non-native and potentially damaging species that might be making their way up the river from the bay of Green Bay to the upland lakes, including Lake Winnebago.

Working closely with professors outside the classroom on projects such as De Stasio’s invasive species research is regarded by many students as the most enriching experience of their Lawrence education. One of 15 Lawrence students to date who has assisted on the invasive species study, Adam Breseman spent the summer in De Stasio’s lab analyzing water samples, searching for anything from Chinese mystery snails to another invasive fish, the Eurasian Ruffe.

“It was a very intellectually stimulating experience,” said Breseman, a biology major from Baileys Harbor. “Coming into this, I knew very little about zooplankton and benthic invertebrates, but I learned a tremendous amount about those organisms as well as the Fox River watershed system. I’m only a sophomore, so I appreciated the opportunity to work on an internship like this.”

As the process of restoring and reopening the entire 17-lock navigational system between Lake Winnebago and Green Bay moves toward an anticipated 2015 conclusion, De Stasio’s research will be critical in determining whether a proposed boat transfer station at the Rapide Croche lock near Wrightstown is successfully keeping invasive species out of the upper river system.

Started in 2005, De Stasio’s study is collecting data on both species and populations, and is expected to continue for five years after the boatlift becomes operational.

“Right now we’re trying to identify everything, including all of the invertebrates, living at six different locations — three above and three below the site of the proposed boatlift at Rapide Croche lock — and determine whether it is a native or non-native species,” explained De Stasio. “The possibility of transporting something above that lock is a real concern. It would be easy for a zebra mussel attached to a boat’s hull or a spiny water flea on a fishing line to get moved past the barrier.”

Junior Amanda Dwyer from Ralston, Neb., spent 10 weeks this summer dip-netting, beach-seining and working with an Ekman grab on the Fox River, collecting samples for the study.

“It was an awesome experience going out into the field and coming back to the lab to identify what we collected,” said Dwyer, a biology and environmental studies major. “I became more comfortable with the different sampling methods we were taught in class and I learned the distinguishing characteristics of invasive species versus native species we collected. It was great being able to work with Prof. De Stasio on such an extensive and relevant project.”

To limit the possibilities of upstream spread of exotics and in conjunction with his invasive species study, De Stasio has investigated the use of a hot-water treatment to clean boats — and kill any undesirable hitchhikers — before they pass the Rapide Croche lock. Working with a student, Jessica Beyer, De Stasio has determined that for the most probable invasive species, a five-minute minimum immersion in a tank of 110-degree water would essentially kill any of the invasive species they’ve identified.

“Basically, any boat moving up the river would get dunked in a giant hot water tub that could accommodate boats as large as 53-feet in length,” said De Stasio. “Other parts of the boat, the livewell, bilge and motor, would be hosed down with the hot water as well. This is ecologically preferable to a chemical scrub because you don’t have to deal with any potentially toxic waste issues.”

While the hot-water dunk treatment is expected to prevent invasive species from breaching the Rapid Croche lock, it can’t completely eliminate the possibility of non-native species penetrating the upper river.

Boats taken out of Green Bay or the Fox River below the Rapid Croche lock and relaunched upstream can wind up introducing invasive species beyond the barrier.  Educating boaters of this danger will be critical to the success of limiting the number of unwanted species.

“An education program created by Phil Moy from the UW Sea Grant Program is designed to raise boaters’ awareness about the importance of not transporting their boats from one body of water to another without a significant waiting period to allow the boat to completely dry,” said De Stasio. “Five days is the recommended wait time but longer than that would be even better. It’s going to take a concerted effort by all users to keep the Fox River and other upland bodies of water from being invaded with non-native species. While no plan is fail safe, it’s easier to keep them out than it is to control them once they establish themselves.”