Who Won the Nobel Prize in Economics This Year? Professor Finkler’s Mentors, That’s Who

Most of you have probably never heard of either Tom Sargent or Chris Sims.  I’m not surprised; however, if you are an economics major at Lawrence, they have influenced how you have been taught.  I learned macroeconomics from Sargent.  His emphasis on the microfoundations of macroeconomics forms the base of how I think about macro questions.  In short,  a strong understanding of labor markets and how they work is critical to serious macroeconomic policy making.  Few of our decision-makers today understand that link.  Stated differently,  Okun’s Law (for every 2 percentage points that output is below potential output, the unemployment rate is 1 percentage point above its “natural” level) is an empirical relationship, not a theoretical one, that is if you are not a reductionist (to simple correlations.) Sargent convinced me that to reduce the unemployment rate in this country, one’s understanding must go well beyond how monetary and fiscal policy affect aggregate demand. 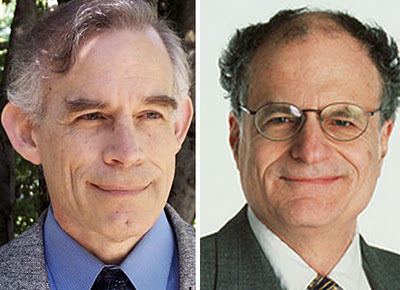 Chris Sims, a first rate econometrician, has addressed the fundamental questions of causality in macroeconomics, especially time series causality.  For those of you without a clue what this means, he tried to solve the chicken (money growth) and egg (GDP growth) problem; which came first?   His answer came in a 1972 American Economic Review paper entitled “Money, Income and Causality.”  Given his award, my students in Money and Monetary Policy will have an opportunity to work through this paper later this term.  Of course, Sims did not stop there.  No reductionist he, he broadened the question to ask of the variables that matter in macroeconomic discussion (Real GDP, Unemployment rate, stock of money, wages, the price level, and import prices), how do they relate to one other.  This paper, published in Econometrica in 1980 under the title “Macroeconomics and Reality”, is a much tougher read.  The conceptual direction and the results, however, are not hard to understand.  Sims argued that we should learn how the histories of each of these variables are related to each another.  He developed Vector Autoregression Techniques to answer this question.  These techniques have been embedded in contemporary econometrics software packages and in the work of many macroeconomists.  Despite the title of the paper, Sims did not believe he had found “the holy grail”, but he believed that an clear understanding of the time series relationships amongst the key macro  variables was essential to know where to look for it.

Of course, I am happy to discuss their work with any and all interested.  I am honored to have been a student of both of these creative economists and celebrate their receipt of the Nobel Prize in Economics for 2011.