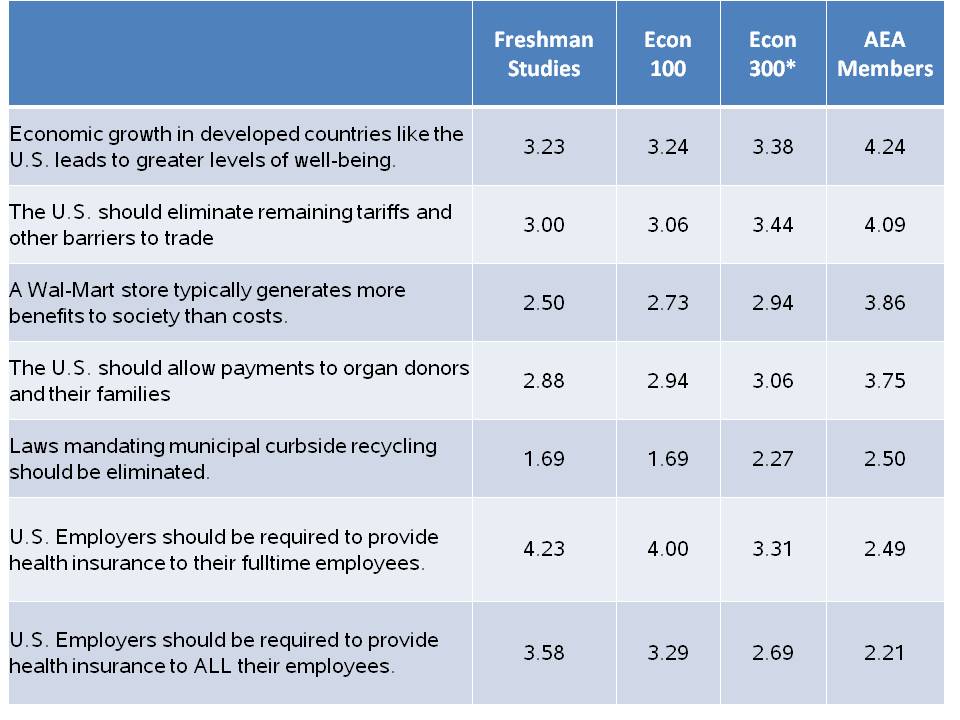 It sure seems like the Freshman Studies and the Econ 100 students have very highly correlated views.  Indeed, the ranking from 1-7 are identical for these two groups, despite some differences in the mean score.  Perhaps Professor Jordan can show us how to do a t-test on those.

On to the policy.  Of the seven statements I’ve culled from the survey, economists are least likely to support a policy mandating that employees provide health insurance.  Why would that be?  Recall from the six policies economists agree on, #2 says that economists don’t like the tax deduction for employee-provided health care and want to get rid of it altogether.  As you can see, this is the policy that Lawrence students without any economics courses are most likely to support.

Efficiency and Price Competition: Another item of note is that our students don’t think that Wal Mart provides net benefits, whereas economists generally disagree.  Some understanding of the concept of consumer surplus and the efficiency implications of brute-force price competition probably leads to more sympathetic views of Wal Mart, I suppose.  Or that Hausman and Leibtag are more convincing than Goetz and Swaminathan.  You might check out Professor Finkler’s thoughtful comment on our previous post.

Dealing with a Shortage: You can also see that economists tend to support liberalization of laws dealing with selling human organs.  Although it is well known that there is an acute shortage of human organs to go around, many people believe that the many considerations of dealing with human organ trade overwhelm the need to increase the quantity of organs supplied.  An excellent piece here.

Comparative Advantage and Gains from Trade: In terms of free trade, you can see that our would-be majors are squarely in betweenthe pro-trade views of the average AEA member and the less enthusiastic views of the FRST and Econ 100 contingents. This, of course, is what Paul Krugman calls “Ricardo’s Difficult Idea.”

We’ll see what next year brings.  I wonder what the mean scores on Briggs 2nd would be?