Fed Chair Breaking All the Rules?

This bit of amusement is brought to you by the University of Oklahoma’s Kevin Grier. Federal Reserve Chair Ben Bernanke opposes a congressional rule that would require the Fed to follow a policy rule.

“The Fed already has a rule,” Mr. Bernanke said during a panel discussion at the Brookings Institution’s Hutchins Center on Fiscal and Monetary Policy. “It’s committed to hitting a 2% inflation target and aiming for the natural rate of unemployment. These are rules.”

And here are the data showing 33 straight months of consumer prices rising at less than 2%: 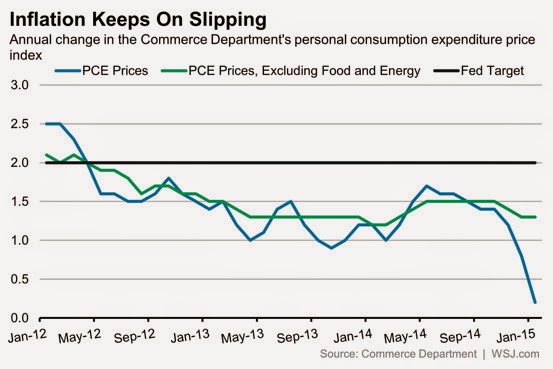 The first Economics Colloquium of the year is our own Professor Marty Finkler talking about some of his recent work on the U.S. employment situation.     He will give a 30-40 minute talk, after which we will adjourn for Econ Tea in Briggs 217 at 5:15.

Please join us for Professor Finkler’s talk, and to meet our visiting faculty, Satis Devkota and M. Taylor Rhodes.

The abstract is below:

Employment and Monetary Policy: The Role of Relative Price Distortions

The economic recovery from the recession of December 2007 to June 2009 featured real GDP returning to its pre-recession level while employment continues to lag behind to its pre-recession level.  One possible reason is that employment patterns contain both cyclical and structural components.  In this paper, changes in the price of labor, unit labor costs, and the cost of equipment and software are studied as key structural components. Separate regressions with changes in employment as the dependent variable are performed for goods producing, service producing, and manufacturing sectors.  In each case, explanatory power is increased with the inclusion of a representation of the cost of labor; thus, macroeconomic policy that seeks to stimulate employment growth should consider the effects of the chosen policy on the relative cost of labor and not just on aggregate demand.

You Shan’t Know Our Velocity

Robert Higgs has a very readable post about the demand for holding cash these days.  To wit, the Fed has been pumping massive amounts of liquidity into the system over the past four years, and what has the public been doing with it?

Exhibit A, this extraordinary graph from our pal, FRED, shows the run up in bank reserve balances from roughly $0 in 2009 to about $1.5 trillion today.  In other words, that’s cash on hand, ready to lend, reserve balances, come and get it.

Higgs points out that this would normally be inflationary, potentially seriously inflationary, but that hasn’t happened because loans aren’t going out and the velocity of money seems to have tanked.

What is the velocity of money?, you ask.

Well, if you have to ask, it is the ratio of nominal GDP to the money supply.  That didn’t help?  Then try here (or if you aren’t from a campus URL, here).

So, that leaves us with the question, why are people holding so much money?

Tough to say.  But here’s some food for thought:

One of the things I assume you learn in macro is that money creation only works if the financial system makes loans, otherwise, not going to happen. Higgs is the champion of the “regime uncertainty” idea, and while I have no pony in this race, I have no better explanation.

GOP Going for the Gold?

Speaking of gold, the Financial Times is reporting that the Republicans are discussing a return to the gold standard.

What do you suppose a return to the gold standard would entail?

I can’t answer that question in short order, but if you are interested, here are some places where I would start.

For a brief overview geared to a more general audience, Michael Bordo has a brief article and a number of references at The Concise Encyclopedia of Economics and Liberty.

For articles geared for more scholarly audiences, check out the article at the New Palgrave Dictionary of Economics (available from on-campus IP addresses), or a lengthier treatment, chocked full of descriptive statistics, is Lawrence Officer’s extensively documented piece at the Economic History Association’s webstite, EH.net.

Ben Bernanke: The Hero or the Villian?

Just in time for your Spring break, Roger Lowenstein (of When Genius Failed fame) gives us an exhaustive profile of Fed chair Ben Bernanke in this month’s Atlantic Monthly.

I am in the middle of big stacks of papers here, so I haven’t had time to plow through the 8,000+ word article, but I like the teaser:

The left hates him. The right hates him even more. But Ben Bernanke saved the economy—and has navigated masterfully through the most trying of times.

Lowenstein appears to cover a lot of ground, including the Krugman v. Rogoff debate.  Here’s a summary and discussion at The Money Illusion blog.

Here’s Charlie Calomiris from back in 1999, predicting a bad end to the Euro.

I predict that the euro will be a weak currency (one that will not retain its value against the dollar), and that it will not be a permanent currency. Ultimately, the euro will most likely be remembered neither as a textbook example of the social gains of properly defining the optimal currency area nor as the harbinger of global exchange rate stability, but rather as an illustration of the importance of fiscal discipline for monetary credibility, and as a monetary example of the tragedy of the commons.

European union will likely strengthen the attraction of the dollar as a numeraire and a store of value. Countries outside of Europe will continue to peg their exchange rates to the dollar. And when the European Monetary Union ultimately collapses, it will itself provide a positive shock to the real dollar exchange rate that will hurt countries that have pegged to the dollar. All of this is unfortunate from the standpoint of global macroeconomic stability—an example of how political constraints that limit rational policy and encourage public profligacy make the global economy less stable than it otherwise would be.

I picked that up from Marginal Revolution, where Tyler Cowen points out that economists from Paul Krugman to Milton Friedman were pessimistic on the long-term prospects.

I think the euro is in its honeymoon phase. I hope it succeeds, but I have very low expectations for it. I think that differences are going to accumulate among the various countries and that non-synchronous shocks are going to affect them. Right now, Ireland is a very different state; it needs a very different monetary policy from that of Spain or Italy. On purely theoretical grounds, it’s hard to believe that it’s going to be a stable system for a long time.

If we look back at recent history, they’ve tried in the past to have rigid exchange rates, and each time it has broken down. 1992, 1993, you had the crises. Before that, Europe had the snake, and then it broke down into something else. So the verdict isn’t in on the euro. It’s only a year old. Give
it time to develop its troubles.

At any rate, Cowen’s point is that economists may have whiffed the financial collapse, but they seemed to hit the ball on the Euro.

Excessive Monetary Easing is Part of the Problem

If short term interest rates drop from .1% to .02% does it generate more economic activity?  If long term rates drop from 3% to 2% (or even 1.7% as with 10 year US Treasury Notes), will people want to borrow more given the current economic environment?  Most readers know my pessimism regarding answers to these questions.  The IMF, in its latest global financial stability report, makes the case quite strongly.  Furthermore, as argued previously and by most “Austrians” since Mises and Hayek, overly cheap capital causes a great deal of mis-allocation of capital.  The Financial Times editorial today summarizes the IMF report.

The IMF’s latest global financial stability report says rightly enough that the eurozone crisis, and the row over the US debt ceiling, sparked an increase in risk aversion. But the IMF worries that exceptionally low interest rates are building a fresh credit problem. They have spurred a hunt for yield which, as widely broadcast, has sent too much capital to emerging markets. When capital is too cheap, it is mis-allocated.

Either credit markets see reasons for economic cheer that have eluded everyone else, or low interest rates have sparked another round of irresponsible lending.

Not Everyone in the US Loves QE2

As a follow-up to Professor Gerard’s post, I  draw your attention to Tom Hoenig, President of the Federal Reserve Bank of Kansas City, who has been the lone dissenter on the Open Market Committee votes on monetary policy.  He fears the consequences of our short term reactive policy making.  His position parallels that of Raghuram Rajan, among others, who note that monetary policy has done all it can and that some of the potential consequences of further monetary easing are destructive both domestically and internationally.  The Chinese and the Brazilians aren’t the only ones yelling STOP!