Compiled with the assistance of researchers at the Washington, D.C.-based non-profit think tank Center for College Affordability and Productivity, the magazine’s just-released 2009 “America’s Best Colleges” report ranks 600 of the country’s 1,600 four-year undergraduate institutions based on the quality of the education they provide, the experience of the students and how much they achieve. Schools were ranked without regard for size. 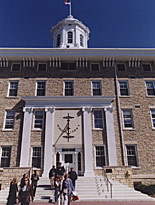 Lawrence, which jumped 27 spots nationally from last year’s 68th ranking, was one of only two state institutions to crack the business publication’s top 100 (Ripon was 100th).

First published in 2008 as an alternative to the annual rankings done by U.S. News & World Report, Forbes’ rankings focus less on institutional reputation and more on aspects that directly concern students: Will courses be interesting and rewarding? How likely is the student to graduate in four years? Will the student get a good job after graduation? How much debt will the student incur in pursuit of a degree?

Data used in the rankings were drawn from numerous sources, including the opinions of four million student evaluations of courses and instructors recorded on the Web site RateMyProfessors.com and post-graduate success determined by enrollment-adjusted entries in “Who’s Who in America” and average salaries of graduates reported by Payscale.com.

“Forbes has once again gone beyond the usual metrics to assess quality in colleges and of course we’re happy that they’ve recognized us for being particularly good at providing a meaningful and powerful experience for our students,” said Ken Anselment, Lawrence’s director of admissions.

In addition to finishing top-ranked among 10 Wisconsin institutions included in Forbes.com’s list, Lawrence also was ranked higher than such traditional educational heavyweights as the University of California-Berkeley (73), Duke University (104) and Ivy League members Brown University (72), Dartmouth College (98) and Cornell University (207).

The U. S. Military Academy at West Point earned Forbes.com’s no. 1 ranking, supplanting last year’s no. 1 Princeton University, which was ranked second this year. California Institute of Technology, no. 2 in 2008, Williams College and Harvard University rounded out the top five.

Liberal arts colleges like Lawrence accounted for six of the top 15 ranked institutions nationally while many of the large state universities landed well down Forbes’ list, including UW-Madison (415), the University of Iowa (430) and the University of Nebraska (463).