Older than the Super Bowl, Lawrence University’s Great Midwest Trivia Contest is to knowledge what a Rolls Royce is to cars.

Knowing what Frank Zappa wrote on a poster he designed in ninth grade for Fire Prevention Week calls for a totally different caliber of mindset than your average “Jeopardy!” contestant.

Lawrence’s annual siren call to all lovers of the most arcane information — The Great Midwest Trivia Contest, the nation’s longest-running salute to all things obscure — celebrates its 48th birthday this weekend (Jan. 25-27) with another 50-hour marathon dedicated to mindless minutia.

Beginning precisely at the beautifully inconsequential time of 10:00:37 p.m., Friday, Jan. 25, the contest runs continuously through midnight Sunday, Jan. 27. As it has since 2006, the contest will be webcast worldwide on the Internet at wlfmradio.com.

Ethan Landes got his trivia contest baptism as a Lawrence freshman in 2009, manning the phones for answers for 12 straight hours. Seeing all the fun the contest’s trivia master’s around him were having, he set his sights on eventually joining them. His dedicated phone work earned him an invitation to trivia master status the following year. Three years removed from phone answerer, he holds the “exhalted” distinction of 2013 Grand Master, overseeing his minion of 12 other trivia masters.

“We like to think we’re the coolest fraternity on campus,” said the senior philosophy major from Westmont, Ill. “Being part of a tradition that is almost as old as my parents is pretty special.”

Among Landes’ duties as Grand Master is generating his share of the roughly 350 questions that will be asked over the course of the 50-hour contest, a task made all the harder these days with ever-better online search engines.

“Writing questions is close to impossible now,” admits Landes.  “I go about my day looking for things that may not have found their way on to the Internet yet. To me, the ideal question is one 10 teams in three minutes can answer. When that happens, it’s almost serendipitous.”

While much has changed in the nearly half-century since the contest began in 1966 as an alternative activity for students who didn’t participate in an academic campus retreat, Lawrence’s Great Midwest Trivia Contest has steadfastly remained true to its founding credo of being pure entertainment.

“Trivia takes the most depressing month of the year and provides something incredibly fun at the end of it,” said Landes.

Over the years, the annual salute to the insignificant has become a much anticipated mid-winter diversion for young and young-at-heart folks outside the Lawrence campus as well.

Appleton’s Kevin Brimmer and his team of fellow “Iowans” caught a permanent case of trivia fever nearly three decades ago and have been die-hard competitors ever since. When the curtain came down on 2012’s contest, Brimmer’s “Iowans Who Want to Recall Trivia #nerdweasel,” finally captured their first off-campus team title.

“We know of 26 ways how not win the trivia contest, but we finally figured out a way to win it. The Iowans will be back with a vengeance this year to defend our hard fought first-place victory last year,” said Brimmer, who hosts a team of more than two dozen first- and second-generation trivia fanatics at his home. Some team members will be arriving for the weekend from as far away as California, Florida, and Oregon. 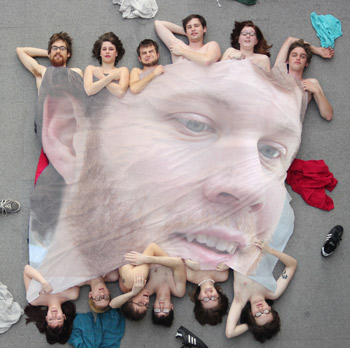 “The original ‘core’ members of the team are so old we had to ‘grow our own,’ and now our kids play with us,” Brimmer added, noting the team’s long-standing tradition of serving chili cheese dogs for lunch on Saturday is definitely on the weekend’s agenda. “This will be our 28th year as a trivia team and I think we can get antique plates for the team in two years. We’re working on our memoirs ‘50 Shades of Trivia.’ We might do Trivia gangnam style this year, who knows.”

While 2013’s Great Midwest Trivia contest will retain much of its usual “charm” — theme hours, eclectic music, crazy action questions for on-campus student teams, ridiculous prizes for the victorious — Landes also promises a few surprises will be in store, but was tight-lipped on any clues.

Following tradition, Lawrence President Jill Beck will get the fun started by asking the first question, which, also by tradition, is always the final, virtually unanswerable “Super Garrauda” question from the previous year’s contest.

“The pure joy you hear when someone correctly answers a Super Garrdua is unbelievable,” said Landes.

That sense of pure joy surprisingly was enjoyed by six teams last year after correctly answering 2012’s Super Garruda question: “In a comment card that was later pictured on a fence privacy screen outside the Museum of Modern Art in New York City in Summer 2011, what does visitor Tonee from Chicago state that they wanted to do when they viewed a Van Gogh exhibit at MoMA on March 28th and why didn’t they act on their impulses?”

Any 2013 trivia team worth its Internet connection will be able to start this year’s contest with an easy 100 points by knowing the card said: “Take a big bite out of Van Gogh’s work” and “lick it” but they didn’t because they “wouldn’t want to sully his fine work or disgrace your museum.”