Lawrence University will recognize Martha Nussbaum, one of the world’s pre-eminent scholars, public intellectuals and an award-winning author, with an honorary Doctor of Humane Letters degree Sunday, June 9 at the college’s 164th commencement.

Nussbaum, the Ernst Freund Distinguished Service Professor of Law and Ethics at the University of Chicago, also will serve as the principal commencement speaker. This will be Nussbaum’s second speaking engagement at Lawrence. She delivered the university convocation “Global Duties: Cicero’s Problematic Legacy” in May, 2001. 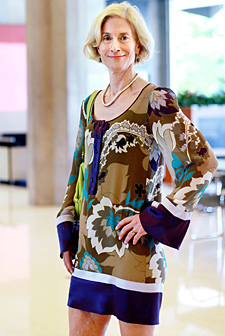 Before joining the University of Chicago in 1995, Nussbaum taught at Harvard and Brown universities. At the same time, she served seven years as a research advisor at the World Institute for Development Economics Research in Helsinki, which is part of the United Nations University. .

“Martha Nussbaum is a great defender of the liberal arts and exemplary role model for our students,” said Lawrence President Jill Beck. “She demonstrates how to bridge effectively scholarly interests with issues of the day and with the need for taking informed positions in our lives and societies. In Dr. Nussbaum’s case, she uses her knowledge of classics to generate contemporary political critique. I’m sure the graduating students will enjoy meeting her and hearing her perspectives.”

Among the country’s most celebrated philosophers and celebrated thinkers, Nussbaum believes philosophers should act as “lawyers for humanity” to address questions of justice, basing her work on a political philosophy of human capability and functioning that has both Aristotelian and Kantian roots. Her scholarship also has focused on the transformative aspects of the connections between literature and philosophy.

“As we tell stories about the lives of others,” Nussbaum has said, “we learn how to imagine what another creature might feel in response to various events.  At the same time, we identify with the other creature and learn something about ourselves.”

A prolific writer with more than 350 published scholarly articles, Nussbaum is the author of nearly three dozen books, including 2010’s “Not for Profit: Why Democracy Needs the Humanities,” in which she argues that the humanities are an essential element for the quality of democracy. Her book “Cultivating Humanity: A Classical Defense of Reform in Liberal Education,” was recognized with the Ness Book Award of the Association of American Colleges and Universities and the Grawemeyer Award in Education.

She has been recognized nationally and internationally with numerous awards, including 50 honorary degrees.  She was the recipient of the 2012 Phi Beta Kappa’s Sidney Hook Memorial Award, which honors national distinction by a scholar in the areas of scholarship, undergraduate teaching and leadership in the cause of liberal arts education. Last year she became just the second woman to receive Spain’s Prince of Asturias Award for Social Science. The award recognizes a person whose work “constitutes a significant contribution to the benefit of mankind.”

A native of New York City, Nussbaum earned a bachelor’s degree in 1969 from New York University, where she studied theatre and classics. She went on to earn master’s and doctorate degrees in classical philology from Harvard University.