Having already created one interfaith ministry at The College of Wooster, Reverend Dr. Linda Morgan-Clement is excited by the prospects of doing so again, this time at Lawrence University.

Morgan-Clement, currently chaplain and director of interfaith campus ministry at The College of Wooster in Ohio, has been named the first Julie Esch Hurvis Dean of Spiritual and Religious Life at Lawrence. The appointment is effective Sept. 1.

The endowed position was established earlier this year by a gift from 1960 Lawrence graduate Tom Hurvis in memory of his wife, Julie Esch Hurvis, a 1961 Lawrence graduate who died in July, 2015. Both were devoted members of the Bahá’í faith and strongly believed in the power of spirituality.

Designed to further enhance the transformative experience a Lawrence education provides, the new leadership position will be dedicated to reinforcing a welcoming and supportive community environment for spiritual and religious exploration and expression of all faiths, beliefs and religious traditions.

“When I visited Lawrence, I was very excited and energized by the opportunity to collaborate with the folks I met with during the interview process,” said Morgan-Clement, who started interfaith services and programming at Wooster in 1996. “There seemed to be a culture of ‘Let’s figure out what we need to do and then how to do it.’ A can-do culture. I’m very excited about creating with them, in partnership.

“To create something new is pretty unusual in a lifetime. It’s what got me to Wooster originally,” she added. “The opportunity for flexible creativity and the chance to develop depth in programs and services has kept me at Wooster for 20 years. To be able to do that twice in a lifetime is an amazing opportunity.” 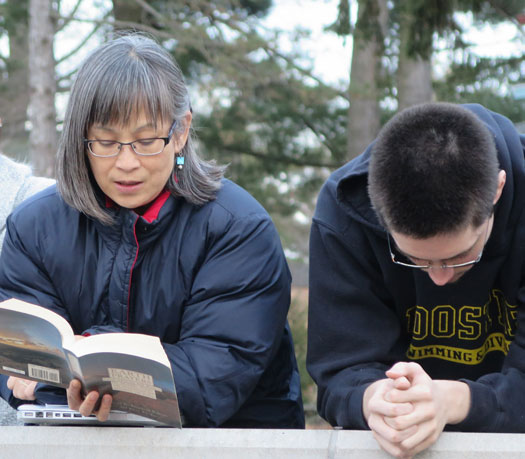 Wisconsin ties also played a role in her decision to accept Lawrence’s offer.

Born in Hong Kong, Morgan-Clement, was adopted by an American family whose father was a Presbyterian minister. She spent most of her formative years living in Wisconsin, first in Oshkosh and then in Sheboygan until she graduated from Carroll University in Waukesha. Her husband, Mike, also grew up in Sheboygan, which is also Julie Esch Hurvis’ hometown.

“I am beyond delighted that Linda will be joining us as our very first Julie Esch Hurvis Dean for Spiritual and Religious Life,” said Truesdell. “She brings relevant experience and obvious passion for this type of work and embodies the caring and contemplative personality that reminds us of Julie. All of the finalist candidates were very impressed by the fact the position is funded through a very special endowment which identifies both donor and college commitment to this area of student development that has largely been unexplored at Lawrence. I have every confidence the entire campus and local community will embrace and assist Linda as she brings focus to an important element of campus life.”

Martyn Smith, associate professor of religious studies and a member of the search committee, said there was much to like about Morgan-Clement.

“Collectively, we thought Linda will be someone who can address the spiritual questions of everyone on campus —students, faculty and staff — but also encourage those who are traditionally religious and who don’t feel they have a home,” said Smith. “She talked about ‘brave spaces’ where people with different outlooks and from different traditions could learn to hear each other and interact with each other. She was clear this position would not be about letting everyone have their own private corner, but that she would look to have people interact. We can’t wait to see this position take shape.”

As a member of the university’s senior staff, Morgan-Clement’s duties will include serving as the face and voice of religious and spiritual life at Lawrence. She will be responsible for providing spiritual leadership and connecting the Lawrence community through campus ceremonies, religious traditions, interfaith services and celebrations. She also will oversee the Volunteer and Community Service Center staff and operations.

Morgan-Clement sees her role as an opportunity to break the traditional understanding of what spiritual and religious life might mean in popular U.S. culture. 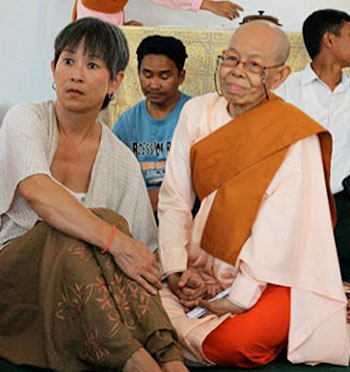 “I hope to reach everyone in some way, regardless of any belief system, religious or spiritual background,” she said. “I’m excited the position is connected with service. My vision is to help people shift from being human doers, with a focus on resume creation and what we do that defines us, to human beings, with a focus on the large questions of purpose and meaning, and growth and relationship with others. It doesn’t matter whether we know them or not. The relationship question includes the environment. I think we learn how to engage these big questions and relationships best through experience and service.”

Nauman Khan, a sophomore from Lahore, Pakistan, sees the new dean’s position as vital to promoting religious sensitivity on campus.

“Raised in a South Asian Muslim culture where religion was given a lot of importance, I was very surprised to see how religious teachings were not included in discussions around college campuses in the United States,” said Khan. “With a rising number of people coming to Lawrence from different cultures, it is very important for the institution to increase awareness about religion and spirituality.”

Sophomore John Newhall, one of three students on the search committee, is confident Morgan-Clement “will enhance the spiritual environment at Lawrence greatly.”

“Having served as campus minister at the College of Wooster for two decades, she has a deep understanding of the liberal arts,” said Newhall, a religious studies and film studies major who is working to reconstruct Lawrence’s Unitarian Universalist group on campus. “It’s clear from her engagement at Wooster she will be active and present throughout the campus, from community service, volunteer work and social justice work through to spiritual, academic and general campus life.”

Senior Elana Lambert, who also served on the search committee, sees the new dean as a valuable asset to campus life.

“As one of the co-presidents of Hillel, I think it is going to be really important to be able to go to Rev. Morgan-Clement for support when solving problems or advice when planning events and helping us to expand our organization,” said Lambert.

“My vision is to help people shift from being human doers, with a focus on resume creation and what we do that defines us, to human beings, with a focus on the large questions of purpose and meaning, and growth and relationship with others.”
— Reverend Dr. Linda Morgan-Clement

“It’s critical that higher education, which talks about holistic education, represents this conversation because it’s so misunderstood,” said Morgan-Clement. “National research shows students, faculty, everybody, domestically and internationally, is trying to come to grips with the larger spiritual question. For an institution to give someone the responsibility, a person and a place that says, ‘It’s alright, in fact we encourage you to wrestle with questions of meaning and purpose,’ I think that’s essential. This position is one more component to that kaleidoscope of really creating a learning community.”

She has been the recipient of numerous grants and awards, including a nearly $2 million grant from the Lilly Endowment to establish a program for theological exploration of vocation at Wooster. Among several published works she’s written, she contributed the chapter “Betwixt and Between: Interstitial Dialogue, Identity and Mending on a College Campus” to the 2013 book “College and University Chaplaincy in the 21st Century.”

Married with two daughters, her husband is a chemist at Ashland University while her daughters, Antonia and Morgan, are graduates of Wooster and Allegheny College, respectively.