During her 25-year career at Lawrence University, Nancy Truesdell has worn several different hats. At the end of the 2016-17 academic year, she will transition once again, moving from her current role as vice president for student affairs into new responsibilities as special assistant to university President Mark Burstein.

The university will begin a national search for her replacement this fall. Once a new vice president for student affairs is hired, she will move to her new role, where she will lead efforts to improve administrative efficiency, update university policies and procedures, and help deepen the sense of community on the Lawrence campus.

“Working in student affairs provides a wonderful blend of daily student contact, administrative decision-making and interaction with dedicated staff and faculty who share my love of Lawrence,” said Truesdell. “It is an honor to work with bright, creative and hard-working Lawrentians. I have appreciated the opportunity to get to know generations of students, hire and train exceptional staff members, create programs and make changes that have enhanced the student experience. I’m excited to take on the challenge of a new role with new responsibilities. I plan to continue to do my best to serve this institution that means so much to me.”

“Nancy’s leadership and skill have strengthened Lawrence in innumerable ways,” said Burstein.  “Her focus on what is best for our students, on enhancing campus community, and on farsighted efforts to improve the education we offer have been a hallmark of her tenure.  I look forward to having her expertise and energy invested in new challenges that face the university.”

During her tenure, Truesdell was the driving force behind the creation of the university’s Diversity Center, Hiett Hall, which introduced suite-style living to the campus, and the Warch Campus Center. She organized the expansion of the Volunteer and Community Service Center, created the Health and Wellness department, directed the development of new orientations for students and parents, helped launch CORE, a student-mentoring program for freshmen and transfers, and led the establishment of the office of spiritual and religious life.

In 1998, she was recognized with the university’s Babcock Award, which honors a person whose involvement and interaction with students has a positive impact on the campus community. 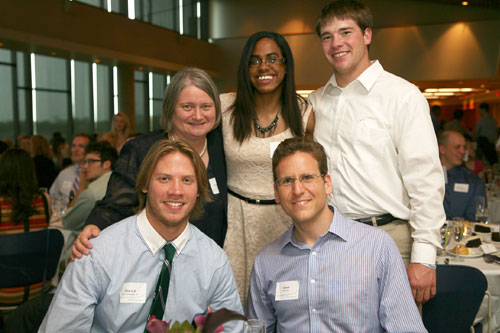 Prior to Lawrence, Truesdell held administrative positions at Cornell University, Heidelberg College, Sweet Briar College and Hobart and William Smith Colleges, among others.

Active in the greater Fox Cities community, Truesdell is a member and former chair of the board of directors of Harbor House domestic abuse programs, and a former member of the board of Appleton’s A Better Chance program.

She graduated Phi Beta Kappa from Ripon College with a degree in English and earned a master’s degree in education with an emphasis in college student personnel from Bowling Green State University in Ohio.