Lawrence University’s quarterly magazine has been recognized with a 2016 Pride of CASE gold award in the annual competition sponsored by the Council for Advancement and Support of Education (CASE).

The Pride of CASE V Awards Program honors institutions and individuals who demonstrate outstanding achievement in the concept and execution of advancement programs and communications throughout the six-state District V (Wisconsin, Illinois, Indiana, Michigan, Minnesota and Ohio).

Lawrence was honored in the best alumni/institution magazine category for colleges and universities with less than 3,000 students. Specifically cited were the 2016 Winter and 2016 Spring editions, which examined Lawrence’s commitment to engaged learning on a global scale and how a liberal arts education prepares students for success in the workforce and in life, respectively.

The award was based on several criteria, including the objectives of the magazine publishing program; the magazine’s content, writing, editing, layout/design and print quality; creative story ideas and how best it serves the audience.

Tom Ziemer is the editor of the magazine and Elizabeth Boutelle is its art director.

Craig Gagnon, associate vice president of communications, said the magazine’s evolution was the result of a deliberate, research-driven process to inform content and design. 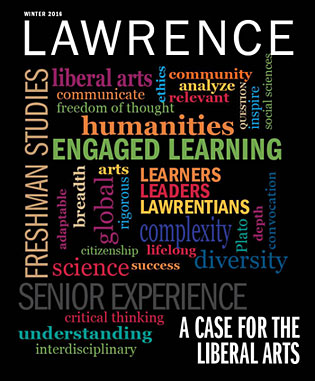 “We began by taking a critical look at our own magazine as well as those of more than 30 other colleges to identify the characteristics of the best in class,” said Gagnon. “We then conducted a readership study to determine what was of greatest interest to our readers and compared those results to national norms.

“With information in hand, our writers and designers made incremental changes over the past two years, leading to a compelling magazine that combines creative execution with reader interest,” he added. “Although the evolution will continue, we’re delighted to have been recognized for our efforts to date.”

This was Lawrence’s third CASE award in the past two years. In June of this year, Lawrence earned gold honors for its recruitment package of brochures entitled “The Power of Engaged Learning at Lawrence University” and its student recruitment single mailer “Don’t Just Finish. Flourish.”

In 2015, Lawrence won a Grand Gold award, CASE’s highest honor, in the general information video category for “The Rabbit’s Nose,” a spoken-word piece, written and performed by Shea Love, a 2014 graduate, and produced by Rachel Crowl.