The Lawrence University Conservatory of Music is once again partnering with Music for Food, a national program for local hunger relief, to help combat hunger in the Fox Cities during the holiday season.

The Music for Food concerts are:

• Friday, Nov. 11, Lawrence Concert Choir, Cantala women’s choir, Viking Chorale, 8 p.m. Free. On the heels of the most divisive presidential election in memory, Lawrence’s nationally-recognized choirs present “Speaking Out.” The performance will explore vocal music’s ability to make a difference by bringing communities together to provoke change or to heal wounds. The program will feature songs that have toppled empires, roused nations to revolt, called us to account for our failures to live up to our dream and shown us our better selves.

• Saturday, Nov. 12, Lawrence Wind Ensemble and Symphonic Band, 8 p.m. Free. Titled “On the Shoulders of Giants,” the concert honors both the wind ensemble’s world premiere of a work by the same name written by Lawrence graduate David Werfelmann as well as the caliber of the program’s other composers. The wind ensemble also will perform Gustav Holst’s masterpiece “Hammersmith.” The symphonic band program features works by composing giants in the genre — Norman Dello Joio, John Barnes Chance and Michael Daugherty. 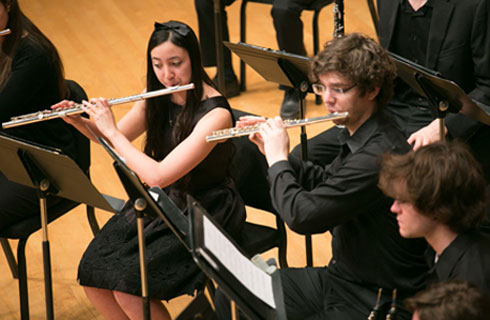 This marks the fourth year Lawrence has participated in the Music for Food program. Last year Lawrence concerts generated more than $1,350 and 75 pounds of donated food for St. Joe’s.

Music for Food is a musician-led initiative founded in 2010 by violist Kim Kashkashian in collaboration with the New England Conservatory. Concerts raise funds and awareness to combat  hunger, empowering musicians who use their artistry to further social justice. Now in its sixth season, Music for Food has provided more than 200,000 meals through donations made at certs on behalf of more than a dozen hunger-relief organizations.