As a scholar of Chinese language and literature, Jane Parish Yang was instrumental in expanding Lawrence University’s foreign language curriculum when she joined the faculty in 1991.

But it was her involvement with the long-standing hallmark of a Lawrence education that she considers a highlight of her teaching career.

“I really enjoyed teaching Freshman Studies because you’re working with your colleagues. And the training we do for it is wonderful,” said Yang, who is retiring this month after a 34-year teaching career, including the last 24 years at Lawrence. She will be recognized Sunday, June 14 with professor emeritus status and awarded an honorary master of arts degree, ad eundem, as part of Lawrence’s 166th Commencement Ceremonies on Main Hall green, which will be available via livestream.

“Teaching Einstein dampened my enthusiasm somewhat,” Yang added with a smile of her Freshman Studies experience, “but I loved teaching Shakespeare. We also taught ‘The Marriage of Figaro’ for several years and then had the conservatory perform the opera, which was wonderful. I taught Freshman Studies a total of 10 years and I’m so glad I did it.”

Yang came by her career in Chinese in part by serendipity. After graduating from Grinnell College with a degree in American Studies — she grew up a half block from the Iowa campus, which is also the alma mater of both of her parents, her grandfather and a daughter — Yang participated in a “5th year abroad” program thanks to some left over funds from a long-since discontinued program in China that Grinnell once ran.

“I went to Hong Kong, which was completely by chance,” said Yang. “And then I traveled in India and Europe and when I came back I decided to start studying Chinese.”

She began an intensive Chinese language class at the University of Iowa while pursuing a master’s degree.

“Unfortunately you can’t really learn Chinese in the middle of Iowa, so I went to Taiwan,” said Yang.

After studying Mandarin at Fu Jen Catholic University and Stanford University’s Chinese center, she returned to the states to complete her master’s in Asian Studies at Iowa and earn a Ph.D. in Chinese at the University of Wisconsin-Madison.

Yang split the ensuing decade among teaching appointments at National Taiwan University, Colby and Oberlin colleges and UW-Milwaukee before arriving at Lawrence to help launch its fledgling program in Chinese. 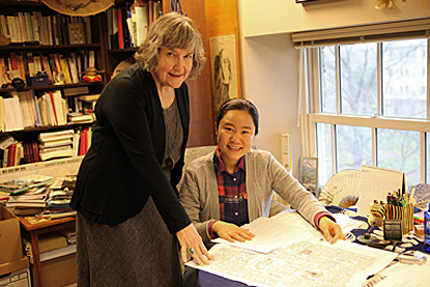 In addition to sharing her language expertise — Chinese is a four on the four-level scale of difficulty of foreign languages —Yang played a critical role in helping the upstart program gain traction by successfully writing more than $2.1 million in grant proposals. The subsequent funding she helped generate opened up opportunities for students and faculty alike for internships and study trips tours to China and other East Asian countries.

“Directing some of these programs and providing opportunities for field experiences to students as well as faculty was certainly a high point for me,” said Yang, who has led at least 10 student and/or faculty trips to Asia during her tenure at Lawrence and counts Xi’an, China as her favorite destination. “When I came, we were not very internationalized, but I think that’s changed a lot now.”

Yang, who co-founded the Wisconsin Chinese Language Association of Secondary Schools while at Lawrence, points with particular pride to a $1.5 million grant from the Freeman Foundation that supported more than a dozen separate trips abroad between 2001-2005, impacting the campus beyond just the Chinese and Japanese department.

“We were able to take so many people on those trips. I think we took half of the faculty who were here at the time,” said Yang. “The various groupings of students and faculty who went on all those different trips represented so many areas of the college, including the conservatory of music. Our expectations were not that you came back as an expert, but perhaps you could add something about East Asia to a course as some sort of comparison or reference. On that front I think we succeeded.”

“Directing some of these programs and providing opportunities for field experiences to students as well as faculty was certainly a high point for me. When I came, we were not very internationalized, but I think that’s changed a lot now.”
— Jane Yang

With the emergence of China as a world superpower, Yang believes it is imperative Americans understand the role that region of the world will play in the future.

“I don’t think everybody needs to start learning Chinese, but I think everybody should be aware of the importance of East Asia,” said Yang. “We’re going to be dealing with China and all of its relationships with its neighbors for years to come. We need to have a good understanding of Chinese culture.”

An opera lover and an avid swimmer  — she’s less than 80 miles shy of earning her 750-mile t-shirt through the YMCA’s Y Miler program — retirement won’t mean an end to teaching entirely for Yang, who is about to become a bicontinental resident of the planet.  Her husband is the founder of an institute for philosophy for children in Taipei. For the past two years, Yang has split time between Appleton and their home in Taiwan, where she’s been leading an adult reading group, exploring children’s and young adult literature written in English at the institute.

“I’ve been taking the reading group more in the direction of my interests lately, looking at memoirs,” said Yang, who spends spring and summer and part of the fall here, but escapes in the winter to the family retreat in the mountains in Taiwan. “This past winter I did ‘A Room of One’s Own.’ Sometimes we do a bilingual class where we look at the original text but also the Chinese translation. I’ll be there for five weeks later this summer and we’ll study ‘A Tree Grows in Brooklyn’ along with the Chinese translation. It’s fun for me because I get to do a little bit of teaching.”

Regarding her formal recognition at this year’s commencement, Yang says she’s looking forward to receiving her new attire, trading her University of Wisconsin regalia for her Lawrence academic hood.

“It has been a privilege to be a faculty member at Lawrence for this long,” she said.

Ruby Dickson will venture outside the United States for the first time this summer courtesy of the U.S. Department of Education.

The Lawrence University junior from Louisville, Colo., has been awarded a $2,700 Fulbright-Hays Scholarship for the 2015 Associated Colleges in China (ACC) Intensive Language Program. In addition to the scholarship, Dickson will receive $800 for travel expenses.

This is the 10th year in a row at least one Lawrence student has been recognized by the Fulbright Program. Dickson is the 14th Lawrence recipient of a Fulbright award in the past five years.

Beginning June 14, Dickson will participate in a Chinese language immersion program at Beijing’s Minzu University. The program runs through Dec. 7.

“I’m really excited for the chance to go to Beijing, especially since this is my first time leaving the United States,” said Dickson, who is pursuing a double major in Chinese language & literature and economics. “The Fulbright-Hays will help me with funding this amazing opportunity and I’m incredibly grateful for the generosity of those responsible for the scholarship.

“While I’m in China, I’ll have the opportunity not only to learn the Chinese language, but also to understand Chinese culture, conduct research and make valuable friends and connections,” Dickson added. “The Fulbright-Hays represents an amazing opportunity to build on my experiences at Lawrence. I can’t wait to begin my trip.”

Kuo-ming Sung, associate professor of Chinese and linguistics and one of Dickson’s academic advisors, said she is one of the brightest and hardest working students he has had in his classes.

“What is truly remarkable about Ruby is her creativity and imagination,” said Sung. “She transforms otherwise ordinary sentence patterns and vocabulary into fun-filled dialogues and compositions. Her oral presentations are always enthusiastic and infused with a wonderful sense of humor.”

Following her language program, Dickson will remain in China for several more weeks to complete an internship in the finance department of Deprag Industries, a Germany-based industrial manufacturing company with an office in Beijing.

David Gerard, associate professor of economics, said Dickson came to her economics major late, but has quickly distinguished herself.

“Ruby’s academic excellence is no accident. I call on people randomly and she has consistently demonstrated she had prepared for class and typically has a handle on even the more difficult material. She has very good foresight, is an exceptional planner and certainly does not shy away from academic challenges. Many students will take courses to protect their GPA, but Ruby shows no indication of taking that route. The internship abroad presents a great opportunity for her to operationalize her economics training and her liberal arts education more generally.”

Administered by the U.S. Department of Education, the Fulbright-Hays Group Program Abroad seeks to strengthen foreign language expertise through advanced overseas study and research opportunities and by providing experiences and resources that enabling educators to strengthen their international teaching.