Award-winning trumpet player Jeremy Pelt and his four-member band make their Lawrence University debut Friday, February 17 at 8 p.m. in the Lawrence Memorial Chapel as part of the college’s 2011-12 Jazz Series. 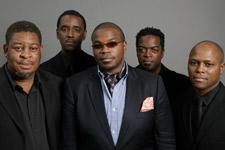 Since its formation in 2007, the Pelt Quintet has emerged as one of jazz’s top-tier mainstream performers. The band recently returned from an international tour that took them throughout Europe as well as Turkey and India and celebrated the release of their fourth album, “Soul,” which features six works written by Pelt.

Legendary jazz writer, producer and former associate editor of DownBeat magazine Nat Hentoff has said “It is the beat of Jeremy Pelt’s heart…that underscores the future of jazz.”

A California native who began playing the trumpet in elementary school, Pelt has earned the repeated praise of DownBeat and the Jazz Journalist Association, both of which have named him a “rising star” on trumpet five years in a row. His early focus was on classical studies, but in high school his interests in jazz emerged. He went on to study jazz performance and film studies at Boston’s Berklee College of Music. 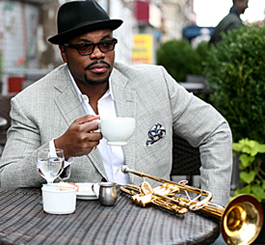 He played his first professional gig with the Mingus Big Band and since making his home in New York, Pelt has performed with jazz icons Roy Hargrove, Ravi Coltrane, Greg Osby and Cassandra Wilson, among others.

“Jeremy’s Quintet brings a performing style to Lawrence’s Jazz Series that we haven’t witnessed on campus since the Mingus Big Band was here in 2003,” said Fred Sturm, director of jazz studies and improvisational music at Lawrence. “It’s too confining to dub it ‘hard bop,’ though Jeremy is obviously influenced by the great lineage of hard bop era trumpeters Clifford Brown, Lee Morgan, Freddie Hubbard and others. Jeremy and the guys bring their unique individual musical histories to the table, drawing upon influences as far ranging as Louis Armstrong and hip hop. I suspect what we’ll hear may best be described as ‘contemporary straight ahead jazz.'”

“I’m anxious for our jazz students to hear and interact with Jeremy and his band,” said Sturm.  “This is a young jazz artist who is only a decade farther down the road than our upperclassmen. It will be inspirational for the students to witness what big-league talent and dedication will earn you in a rigorous and competitive domain.”

Founded in 1847, Lawrence University uniquely integrates a college of liberal arts and sciences with a world-class conservatory of music, both devoted exclusively to undergraduate education. Ranked among America’s best colleges, it was selected for inclusion in the book “Colleges That Change Lives: 40 Schools That Will Change the Way You Think About College.” Individualized learning, the development of multiple interests and community engagement are central to the Lawrence experience. Lawrence draws its 1,445 students from 44 states and 35 countries.