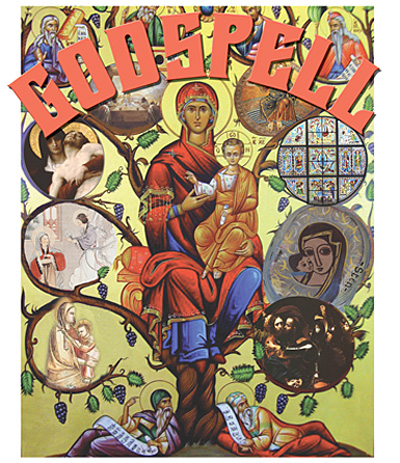 The new work written by senior Nikko Benson with stage direction by junior Andi Rudd, explores opposite ends of the musical theatre spectrum.

“Hope,” the first half of the show, follows the struggles of a group of refugees as they attempt to escape a genocidal government. Removed from any specific historical or cultural context, the story explores the darkness of the human experience, calling into question the purpose of hope itself.

“Who’s Waldo,” is a contrastingly lighthearted story about the title character. An amnesiac, Waldo embarks on a journey of self-discovery as he travels the world of classic literature, meeting other characters along the way.

As the second half of the musical, “Who’s Waldo” raises the question of comedy’s role and placement in a production. The story wants the audience to wonder whether comedy exists to help us forget tragedy or to give us the hope we need in order to face it.

Lawrence’s Term I production of Naomi Iizuka’s “Language of Angels,” under the direction of Kathy Privatt, associate professor of theatre arts, was one of 12 plays selected for performances from among 58 entries in the five-state Region III, which includes colleges and universities in Wisconsin, Illinois, Indiana, Ohio and Michigan.

“Language of Angels” is the second Lawrence production in six years to be selected for a ACTF regional performance, joining “Translations” in 2000. The eight member cast will perform the play three times at the festival — all on the same day: Friday, Jan. 13 at 12 noon, 4 p.m. and 8 p.m.

Nearly 75 productions from colleges and universities nationwide will participate as finalists in eight regional competitions in January. Four regional competition winners will be invited to the national finals in April and perform at the Kennedy Center in Washington, D.C.

“This invitation to perform at the festival is really an honor, particularly since I chose this show as an artistic stretch with opportunities for collaboration,” said Privatt. “It’s the first production I’ve directed that could be chosen for the festival, so to receive an invitation the first time around is certainly gratifying.”

The ACTF program was founded in 1969 to encourage, recognize and celebrate the finest and most exciting work produced in college and university theatre programs and provide opportunities for participants to develop their theatre skills.

Nearly 1,000 productions and 20,000 students nationwide annually participate in the competition, which doesn’t differentiate by school size or institutional type, which means Lawrence’s production was selected over some from much larger universities, including some with graduate theatre departments.

“Competing successfully against schools with MFA’s certainly gives credit to the training and artistic work we undertake here at Lawrence,” said Privatt. “Honors like this one also suggest that we have a solid sense of who we are and what we do well as artists. An invitation to perform at the festival is certainly an affirmation of the truly magical theatre that happens when Lawrence faculty, staff and students work together.”

Last year’s ACTF Region III competition attracted a record crowd of 1,646, the most of any region in the 38-year history of the festival. That record could be eclipsed this year, with attendance projected to top 1,700.
In addition to the production as a whole, seven Lawrence students have been invited to participate in individual categories at the ACTF regional competition.

They will be among more than 300 student actors who will perform individual scenes of their choosing before a panel of judges. Two regional winners each will receive $500 scholarships and advance to the national finals in Washington, D.C. where two national winners will be chosen and awarded $2,500 scholarships. The Irene Ryan Scholarship was established in the will of the late actor, best known for her role as Granny on the TV hit show “The Beverly Hillbillies.”

Also from the “Language of Angels” production, senior Brian Teoh (Katy, Texas) was one of 19 students chosen for the sound design competition while sophomore Jes Vittitoe (Missouri Valley, Iowa) will be among 13 students participating in the make-up design competition.

“The whole festival is an educational candy store for faculty and students alike,” Privatt said. “It offers opportunities to connect with other colleagues, see their best performances and learn from them in workshops in a focused setting. It’s truly an exceptional experience.”

First performed in 2000 in San Francisco, “Language of Angels” follows a group of working-class friends who are haunted by the disappearance of a young girl in a backwoods cave in North Carolina. The small-town tragedy provides a vehicle for a chilling mystery of fate and redemption.