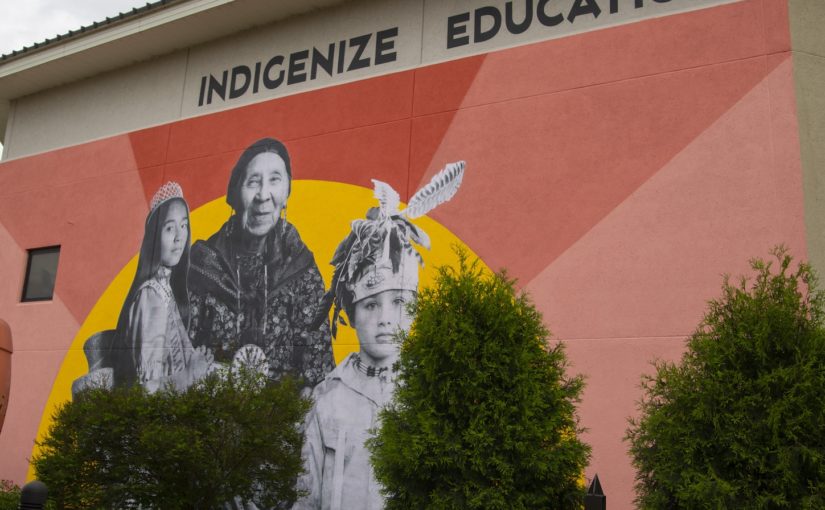 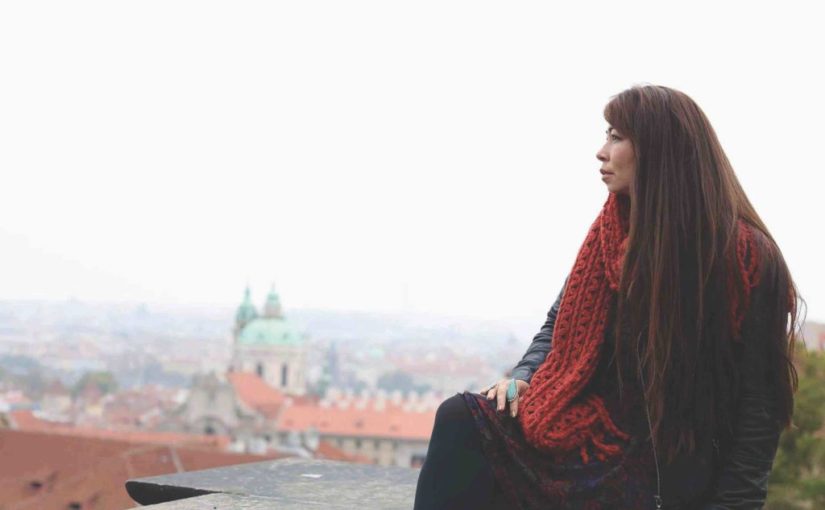 Brigetta Miller calls it a historic moment for Lawrence University, a big step forward in the understanding of Native communities and the need to embrace and value the knowledge, history and contributions of indigenous people.

When Matika Wilbur, creator and director of Project 562, arrives on campus on Friday, April 5 for a week-long artist-in-residency — including the creation of a contemporary mural celebrating area tribal communities — and an April 11 convocation address at Memorial Chapel, it will be significant.

“I see this spring convocation as history unfolding before our eyes since it’s the first Native American woman who has been chosen as a university convocation speaker since the opening of the institution in 1847,” said Miller, an associate professor of music in the Lawrence Conservatory of Music and a member of the Stockbridge-Munsee (Mohican) Nation.

“Given the fact that our campus is on sacred Menominee ancestral homelands, I believe our ancestors are truly smiling down on this event. It’s a very big deal for us to be visibly represented in this way.”

Wilbur, a visual storyteller from the Swinomish and Tulalip peoples of coastal Washington, has been traveling the country as part of Project 562, using photography and art installations to connect with tribal communities and help redirect the narrative of their history, their present and their future. The 562 is a reference to the number of federally recognized tribes in the United States at the time the project launched in 2012.

Wilbur sold most of her belongings, loaded her cameras into an RV and set out to document lives in tribal communities across all 50 states. Connecting to college campuses along the way has been a big part of her journey.

“We are in a very critical time that requires educators, administrators and college communities to create a more inclusive environment for Native American students,” Wilbur says in her Project 562 plan. “By engaging in this social art project, students will have the opportunity to, a) organize, b) have their voices heard on campus, and c) elevate the consciousness and encourage the social paradigm shift to acknowledge the contemporary indigenous reality.”

That’s music to the ears of Miller, a 1989 Lawrence graduate who teaches ethnic studies courses in Native identity, history, and culture and works with Native American students on campus as a faculty advisor to the LUNA (Lawrence University Native Americans) student organization.

This community — on campus and beyond — needs to know that Native culture is alive, vibrant, intelligent, resilient, and moving forward, she said.

“I learned of her work a few years ago,” Miller said of Wilbur. “I saw her mission. I’ve been an educator for many years, and when I saw the beauty of what she was doing, substituting the historical distortions and fixed images of the past for the truth about our people, raising visibility for the historic erasure that has happened, sharing the many parts of our culture that often don’t make it into the history books, that inspired me.

“Her message is that we are resilient and we are strong and that we’re reclaiming our own narrative. She’s really aiming to share that part of our story, as opposed to one that popular American culture often believes is dead or invisible. As indigenous people, we are interrupting the settler narrative of the past, embracing our present and ensuring the future for our children. We are moving, we are shaking, we are scholars, we are artists — the sky is the limit for us.”

Wilbur recently teamed with Adrienne Keene, a member of the Cherokee Nation, to launch a new podcast, All My Relations, now live on iTunes, Spotify and Googleplay. It’s an extension of Project 562 in many ways, aimed at exploring relationships and issues important to Native people.

“I see her as a change agent,” Miller said. “Heads are turning.”

A reflection of who we are

At Lawrence, in the week leading up to the convocation address, Wilbur will work closely with Native students and allies to bring the outdoor mural to fruition. They’ll start with a workshop on photography and the important role of art in social justice, focused on how they can document the lives of indigenous people ethically and respectfully.

A group of students will then join Wilbur on visits to nearby reservation lands, where they’ll meet with tribal members, take photos, and participate in a seasonal longhouse ceremony. They’ll use the photos in the creation of a collage that will form the core of a mural to be installed using wheat paste on the outside north wall of the Buchanan Kiewit Wellness Center.

The mural, a non-permanent installation expected to remain visible for two to five years, will be unveiled following the 11:10 a.m. convocation on April 11.

“It means a lot to me that this convocation and art installation will show the beauty and forward-thinking of our culture,” Miller said. “It means more than one can imagine for our current Native students. It’ll be the first time we’ve had contemporary Native American artwork on the side of one of our buildings. Our indigenous students will see themselves reflected back for the first time ever.”

In her convocation address, Wilbur will discuss Project 562 and takeaways from her interactions with Lawrence students, the visits to area tribal lands and the creation of the mural.

Beth Zinsli, an assistant professor of art history who chaired this year’s Public Events Committee, said the invitation to Wilbur is part of a rethinking of convocation.

“In addition to our excitement about bringing an indigenous woman to campus for this honor, the Public Events Committee was interested in expanding what Lawrence’s convocation series could be — does a convo have to be a single, stand-alone lecture, or can its significance extend beyond the speaker’s visit and have a more lasting and visible impact?” she said. “I think Matika’s residency and the mural will be an excellent example of this.”

The convocation will include a traditional Menominee flutist and an Oneida drum/dance group. There also will be an opening invocation spoken in the Menominee language by Dennis Kenote, chairman of the Menominee Nation Language and Culture Commission. That, too, is hopeful, a reflection of understanding and acceptance that hasn’t always been felt by Native communities on college campuses, Miller said.

“I hope this entire experience opens up the door to further meaningful conversations between cultures,” Miller said. “And I hope it attracts more Native students, faculty, and staff to our campus. I hope it raises visibility about the importance of the deeper cultural knowledge that indigenous people inherently bring to a college campus.

“I want Lawrence to be perceived as a welcoming place for Native students, families, and communities. We do welcome an indigenous presence here — students, faculty, local tribal members. Our doors are open to you. I want our people to know that.”

Native American students from as far away as Plantation, Fla., and Battle Ground, Wash., representing 24 states and 38 tribes, will participate in an “academic crash course” designed to assist them in the college search process.

As part of the 13th annual program, a bevy of college and high school counselors, admission officers, essay specialists and other educators will be on hand to work individually with students and lead small group sessions on topics ranging from “Overview of the ACT/SAT,” “Financial Aid & Scholarships: How Can I Afford College?” and “Native Students and College.”

The goal of the workshop is to assist Native American students in developing a list of appropriate colleges to consider, prepare a winning application, write a memorable essay, maximize their ACT or SAT scores and navigate the financial aid/scholarship maze. At the end of the program, students leave with a completed college application and a list of colleges with which they are likely to be good matches.

This is the second time in three years the program has been hosted by Lawrence.

“I think College Horizons accepted our bid to host again this soon because they had such a great experience two years ago when they were here and they wanted to come back now that the Warch Campus Center is more than a construction site,” said Steve Syverson, vice president for enrollment and dean of admissions and financial aid. “This program gives Lawrence some great exposure to Native American students and we’re delighted that this year we will have three College Horizons graduates in our student body.”

In addition to admissions personnel from Lawrence, representatives from more than 30 colleges and universities, including Brown, Harvard Princeton, Stanford and Yale will be available to assist the students. Following Native American tradition, an Elder from the Menominee Nation in Wisconsin will be present through the duration of the workshop. Several prominent educators from the College of Menominee Nation will be participating as well.

Since its inception, more than 1,550 students have attended College Horizons and the results have been nothing short of spectacular. Ninety-nine percent of the participants of the program have gone on to post-secondary education, including 95 percent of them to four-year colleges, with 85 percent earning their bachelors degree within five years of starting college.

Syverson noted Lawrence’s participation in the College Horizons program harkens back to the college’s founding.

“In establishing Lawrence University in 1847, Amos Lawrence stated that he wanted to provide ‘gratuitous advantage to the Indians and Germans of both sexes,’ so our involvement with College Horizons affirms part of our original mission,” said Syverson.