Roomful of Teeth returns to Lawrence with its distinctive vocal creations

If your recipe for a beautiful vocal concert includes a dash of yodeling, a pinch of Inuit throat singing, some Broadway belting and a large serving of new music punctuated with clicks, clucks and sighs, then Roomful of Teeth is for you.

The eight-voice, Grammy Award-winning a cappella ensemble brings its distinctive vocals to Lawrence University’s Memorial Chapel Friday, April 7 at 8 p.m. in the final concert of the university’s 2016-17 Artist Series. 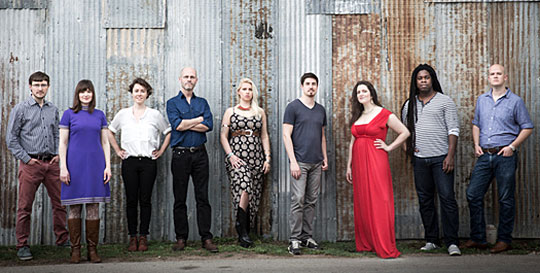 Since its founding in 2009 at Williams College in Massachusetts, Roomful of Teeth has embarked on a mission to fully mine the expressive potential of the human voice, creating instrumental music with their voices. Officially the group includes two sopranos, two altos, a tenor, a baritone, a bass-baritone and a bass. Unofficially, it includes yodelers, classical singers and throat singers.

Their concert program will include “Partita for 8 Voice,” written by former member Caroline Shaw, for which she was awarded the 2013 Pulitzer Prize (2013) for music, becoming the youngest-ever recipient of the Pulitzer for music.

The product of singing traditions, non-traditions and techniques from around the world, Roomful of Teeth has created a unique sound unlike any other vocal ensemble. By incorporating an ongoing commissioning, the ensemble produces a steady stream of new repertoire.

Beyond their concert tour performances, Roomful of Teeth has collaborated with artists as diverse as Kanye West and the Seattle Symphony. They also provided the soundtrack to the documentary film “The Colorado.”

This is the ensemble’s second visit to Lawrence, having previously performed in February, 2014 as part of the university’s New Music Series that year.