Mudd March Madness: First Round in the Books 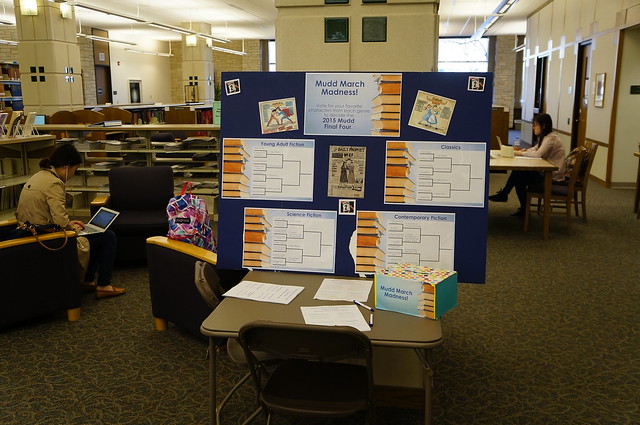 The Mudd March Madness event pits fictional characters from all across literary history against one another. By the end of next week, a champion will be crowned, taking control of the Seeley G. Mudd Library’s bragging rights for the next year.

It was mostly chalk in the first round of the inaugural Mudd March Madness as top seeds hung on in nearly every contest. One huge upset seized the day, however, with eighth seeded Alex (A Clockwork Orange) taking down The Shining’s Jack Torrance, the number one seed in the Contemporary Fiction region.

The Young Adult region saw every top seed advance to the next round. Harry Potter, Katniss Everdeen, and Winnie the Pooh all blew-out their competition en-route to the sweet sixteen. Peter Pan survived a late surge from The Wind in the Willows’ Toad (a well-sponsored fan favorite) to seize a matchup against Pooh bear in the next round.

In the Science Fiction region, fans were treated to the largest margin of victory in Mudd March Madness history with Bilbo Baggins’s outclassing of Rick Deckard in the first round by a score of 56 – 9. A fan found sporting a “If you can’t handle Smaug’s heat get away from the treasure” t-shirt said this of the matchup: “I’ve never seen anything like it. Bilbo wasn’t even challenged in this matchup. It really seems like he’s peaking at the right time. He looks like a champion right now to me.”

Our Classic characters region saw one upset, as Moby Dick took down Anna Karenina 37 – 32 in a low-scoring nail-biter.

The contemporary fiction region found itself with the biggest storyline of the first round. Jack Torrance was frozen out by Alex 34 – 26. With this outcome, fans witnessed the biggest upset in Mudd March Madness history. Alex’s win puts him into contention against The Girl with the Dragon Tattoo’s Lisbeth Salander in the second round, while Tyler Durden and Amy Dunne go head to head in one of the most intriguing matchups of this sweet sixteen.

Fans can vote for their favorites in each matchup of the second round in person at the Seeley G. Mudd Library. Stay tuned to see who is moving on to the elite eight and taking one more step towards the Mudd March Madness championship!