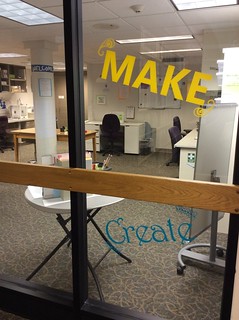 We’ve been finding more and more reports of gender imbalances in makerspaces. This is something we’ve been conscious of since we built our space, so we’ve taken various approaches to attempt to create a space that’s inviting to all genders and non-binary folks.

We’re going to try harder to bring in more academic disciplines- especially those that do not traditionally work with technologies. We also plan to reach out to diversity-oriented student organizations and committees. In regard to makerspace tools and supplies, we plan to work with more fiber arts (including yarn crafts and 3D printing on fabrics) and come up with a wide variety of examples for use when we get our laser cutter.

“An Exploration of Women’s Engagement in Makerspaces” by Vanessa Bean