Issues ranging from homelessness to racial diversity will be explored in a series of short, student-produced films in Lawrence University’s first Human Rights Student Film Festival Wednesday, March 28 from 5-7 p.m. in the Warch Campus Center cinema. The festival is free and open to the public.

The films are the culminating assignment of the English department class “Literature and Human Rights,” in which each student researched a human rights or social justice topic of individual interest and then produced a short film that either advocated or analyzed that topic. Seven of the 17 films created for the class will be screened for the festival. Each film is between four and five and one-half minutes in length. 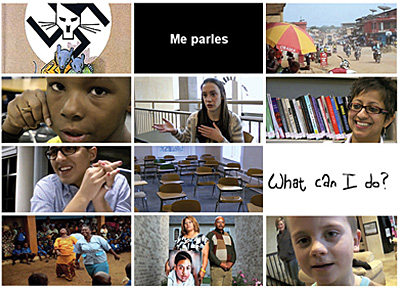 The goal of the project, according to Khor, was three-fold:  invite students to experience first-hand the aesthetic and ethical dilemmas of representing human rights and their violations; provide opportunities to creatively tell a story or make an argument in a multimedia format; and encourage engagement with various communities — Lawrence, Appleton and beyond.

“The students produced some wonderful films on important topics,” said Khor. “They  impressed me with the passion, thought and energy with which they approached this project. Considering most of them had never made a film before, they all should really be proud of their accomplishments.

“This film festival is not just a way to showcase the excellent work the students have done in this class,” Khor added. “It’s also intended to generate discussion on and off campus about social justice issues that are relevant to our everyday lives here and elsewhere.”

Lawrence’s video editor Anna Johnson Ryndova served as a technical consultant to the students on the project.

The festival films scheduled to be shown and their student producers are:

• “People in Need, Changing the Face of Homeless (Austin Rohaly ’15). This film attempts to change the way in which people in need are stereotyped and offer help to organizations in need of volunteers within the Appleton area.

• “FacebΘΘk” (Fanny Lau ’14).  An exploration of Facebook’s violation of privacy and how users can protect themselves.

•  “There and Back Again” (Matthew Lowe ’14). An examination of the human rights violations that occur as a result of a globalized economic system that seeks to minimize costs and maximize profits. As consumers, however, we have the power to vote with our money and our voice to make effective change.

• “‪Ethical Considerations in Art Spiegelman’s ‘Maus’” (Sam Neufeld ’15). An exploration of the ethical issues associated with Art Spiegelman’s decision to portray the Holocaust in a comic book format and the importance of form in human rights literature.

• “Let’s Talk About Race” (Tammy Tran ’14). Racial diversity on the Lawrence campus is examined while addressing the need to recognize, appreciate, and celebrate differences in the student body on a deeper level.

• “Human Rights: The Next Big Thing? (Heather Carr ‘15). This film examines the fad-like quality of human rights advocacy through the lens of the organization Invisible Children.