Holocaust survivor Curtis Brown of Neenah will be one of four Viennese emigrés featured in the world premiere of the Lawrence University documentary film “Surviving Anschluss,” Tuesday, May 7 at 7 p.m in the Warch Campus Center cinema. The screening is free and open to the public. 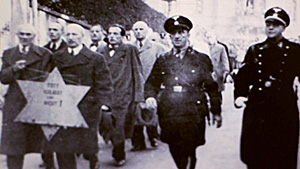 Inspired by Lawrence’s May, 2012 multimedia Holocaust  Symposium, the film includes clips from the symposium as well as individual interviews with the four survivors. In addition to Brown, Anne Kelemen, Gerda Lederer and Renee Weiner, all from New York City, share their personal stories of fleeing Austria in 1938 to escape the Nazis. Anschluss refers to the occupation and annexation of Austria into Nazi Germany.

The documentary, made by students in Lawrence’s Film Studies program, was produced and directed by award-winning filmmaker Catherine Tatge, who is serving as an artist-in-resident at Lawrence, and co-directed and edited by Anna Ryndova Johnson.

The 2012 Holocaust Symposium was produced by Professor of Music Catherine Kautsky, who was inspired by the stories of her parents who emigrated from Vienna to America following the Anschluss. Collaborating with faculty members in departments and disciplines across campus and with assistance from the Lawrence Hillel chapter, Kautsky created a three-day commemoration that featured lectures, discussions, gallery exhibitions and concerts. A performance of Paul Schoenfield’s chamber work “Camp Songs” was a highlight of the symposium and excerpts are woven throughout the film.