If there is any upside to the epic oil spill down in the Gulf (and heading this way), it is that it provided a learning opportunity for my courses in Political Economy of Regulation (Econ 240) and Environmental Economics (Econ 280).  I’ll start with the benefit-cost analysis (I actually started this yesterday and have touched on it here and here), and I will try to get to the regulations next week.

The Environmental Economics class looked at the benefit-cost analysis of offshore drilling described in the Draft Proposed Outer Continental Shelf (OCS) Oil and Gas Leasing Program 2010–2015. The document covered areas in Alaska, California, and the Gulf. The students looked at the benefits and costs of expanding offshore production, including the quantification of the environmental (external) costs.

The results deviated little from the extant program from 2007-2012 (see table), where the quantified benefits were far higher than production and external costs. Most of the benefits manifest themselves in the difference between oil and gas prices and the production costs (net economic value in the table). The producers take a chunk of profit and the federal government takes a 12.5% gross production royalty that it redistributes to the states. 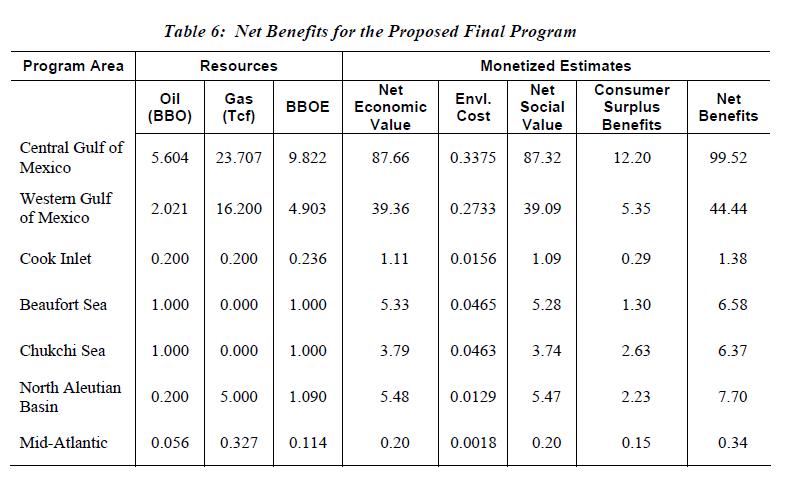 The net benefits calculation is the consumer surplus and producer profits less the environmental costs. As can be seen in the table, the values are dominated by producer profits (roughly equivalent to “net economic value”). The analysis assumes $46/b oil prices, $7 / McF natural gas prices, and a 7% real discount rate.

Yet, the estimated scale of these impacts was trivial (environmental costs in the table). Indeed, it is hard to imagine even with the possibility of a catastrophic spill factored in, that it wouldn’t still pass a standard benefit-cost assessment. This was our focus of discussion in class as we talked about how to think about such an analysis in the face of pervasive uncertainty. Given what we (thought we) knew about the risks, the way we do benefit-cost analysis certainly favored Gulf production.

That assessment certainly squares with analysis by regulation junkies Robert Hahn and Peter Passell.  These gentleman have long beat the drum for more offshore drilling, most recently in their 2010 Energy Economics piece. In a blog post last week, they don’t exactly recant:

It’s egg-on-their-faces time for the assorted politicians and pundits who dismissed the potential for spills in offshore drilling as an acceptable price to pay for access to undersea riches. Does that group include us (Hahn and Passell)? Yes and no. We admit to writing articles, both technical and journalistic, concluding that drilling in the Outer Continental Shelf was likely justified on economic grounds. And we made the case again, a scant month before the BP platform blew up in the Gulf.

So, why the weasel words? Because, like all conscientious benefit-cost analyses, ours was no better than the information available at the time. If we were to do it over, we wouldn’t change the basic approach – in the end, every policy decision that yields costs and benefits is a benefit-cost analysis, and we prefer the kind that are made openly, with the best available data. Only next time, we’d have more information.

That said, we think a moratorium on deep-water drilling makes sense until we understand the BP catastrophe and are confident that we have the technology to contain the consequences of accidents in such challenging waters. We also believe that there needs to be a hard look at the liability structure – less to punish the bad guys than to create appropriate incentives for investing in safety.

So, where does that leave us? According to Martin Weitzman’s fat-tail argument or Nasem Taleb’s (cruelly ironic) Black Swan, there is a fundamental difficulty in using our standard ops to address low-probability, high-consequence events.  On the other hand, I don’t recommend abandoning these tools, either.

For a reasonable discussion of this, I suggest a good post at the Env-Econ blog on how such reasoning can take you down a slippery slope that might prevent you from crossing the street.  No matter how you slice it, it’s a difficult question and an even more difficult answer.